Am having a great weekend so far. Cake Break on Friday went well in that people actually turned up and ate cake! Many thanks to all who contributed and I am so grateful to my friends from playgroup who came along just before 2 as I was starting to lose hope a bit (although it was only an hour in!). Everyone else turned up in the last hour. Had a fairy cake decorating competition for the (ahem) children and here's a picture of the entries 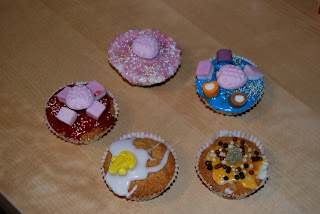 I had intended that people might want to eat the fairy cakes afterwards, but as I forgot about them in the oven and they had about 10 minutes too long, they were more like biscuits than cake. More pictures of cake here, and some recipes here.

There was cake left over, but we were due to spend this afternoon with friends and they kindly (and most selflessly!) said we could bring any leftover cake to them and they would take it off our hands. Reluctantly of course!

Good day yesterday - shopping, visitation from Leigh's brother and lots of ice cream making. Then today went to church this morning with the boys to help at creche. On arrival found Leo had pooed through his outfit so he had to get naked and redressed - poor boy. At least that's what I would have said had he not been grinning throughout! This afternoon saw us at the house of friends, lovely dinner, skittles in the garden with Zachary afterwards, finishing up with some CBeebies and lots of leftover cake.

Tomorrow is bank holiday Monday. In a change to our usual modus operandi (get up late, stay in pj's for most of the morning, then declare 'oh crap, why didn't we organise anything? I can't be bothered to work out somewhere to go now but Zachary's driving me insane') we have actually made plans! Now watch the rain come pouring down...but it's okay, because not only do we have plans but we also have RAIN CONTINGENCY PLANS! Woohoo!

So, tired but happy, I'm about to pour myself an amaretto with cherry coke (suggestion made by my brother-in-law - tried it last night. Why have I never done it before? It's like alcoholic cherry bakewell!!!!) and hopefully find some time for cross stitch. New project started yesterday - exciting.
Posted by Kathryn at 8:12 pm