I have been wanting to try making cannelloni for ages and I bought all the ingredients this week. We've got guests for dinner tonight so as it makes more than the 2 of us would eat I thought it would be a good (foolhardy?) opportunity to try it out. Hmmm. Well, it looks yummy going in the oven, but was a lot more faffy than I imagined and had to be made in 3 sections - the tomato base, the cannelloni filling and then a mascarpone sauce for the top.

Here are my hints and tips -

1. How I ever thought I'd be able to make it this afternoon with two children about is beyond me. Took longer than I thought and there were times there my hands were covered in the filling mix. With Zachary at nursery and Leo asleep it was much more manageable!

2. If you are squeezing excess water out of spinach, wear an apron. Or at least don't wear a white t-shirt.

3. Filling cannelloni tubes. Hmmm. The recipe suggested using a piping bag (I couldn't find any of the nozzles) or using a food bag and snipping off one of the corners. First food bag - too much snipped off corner so filling just oozed around the outside of the tube rather than going in. Second bag - better size of hole for squeezing but it burst when I had about 2cm of filling in the first tube. So I gave up on the bags and just poked the stuff down the tubes with my fingers (yes, clean of course!). That worked quite well, but is v time consuming. So my advice is, get a piping bag sorted or chop the spinach FINELY, rather than ROUGHLY as the recipe suggests! 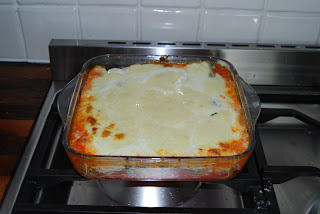 Looks a bit insipid, but I did bake it again before serving and it was delicious!

I also thought it would be a good opportunity to try out making blancmange for the first time. My friend made it for dinner the other week and it was delicious so, copy cat that I am I thought I would have a go. It's in the fridge chilling now and seems okay except that the milk took ages to come to the boil. This would have been fine if Leo wasn't crying throughout the whole process! I was trying to keep the whisking going as instructed, while shouting 'boil, damn you' to the pan, and soothe Leo with my foot. The soothing didn't work! Also, the recipe said to use 'vigourous' whisking so I got out the electric whisk. Tricky to manage if you're using a small pan which has cinnamon sticks and lemon peel in it as well as the milk! Lots and lots of splashing occurred.

Not quite sure how it will turn out but there's always ice cream as a back up if needed!!
Posted by Kathryn at 11:29 am