The boys have a set of Tom and Jerry chopsticks each from McDonalds - the sort where the tops are joined together to make it easier for children.

Very, very lovely even though I over-baked my pastry!!! (oh, and a great opportunity to sneak some marzipan!!) 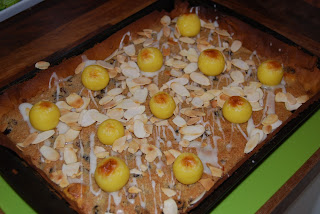 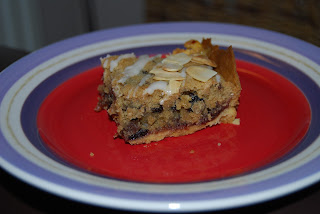 Posted by Kathryn at 9:13 pm No comments:

When ParaTed came to stay

We had a little visitor this weekend - ParaTed from Zachary's school. Apparently he was given to the class by the ambulance men who visited a few weeks ago (suddenly the name becomes clear!) and he only gets to go home with children who are (according to Zachary) very kind and helpful. And Zachary had him for the weekend! Woo-hoo my son!

But...ParaTed comes with a sting in the tail - taking photos of our activities with him and filling in a page of the scrapbook! Over the weekend?!

We had a busy weekend planned as we were off to Norfolk to see my sister and..well, let ParaTed tell you!

First of all there was the school disco (complete with Gangnam style dancing!) 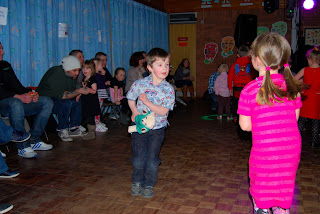 Then dinner and packing for Norfolk... 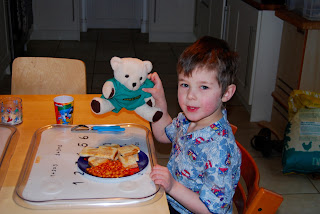 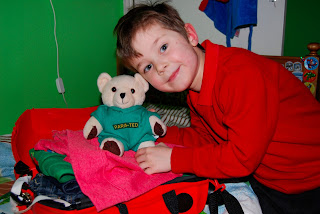 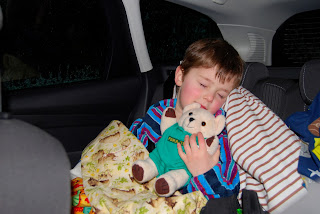 The reason for visiting Norfolk was to visit the big model shop off the A11 at Snetterton. It was brilliant. We were mainly there for Lego, but also picked up a board game and some Hama beads. There were lots of other craft things there, party supplies, dressing up, a kitchen section and a pets section! Here are some of the big Lego models... 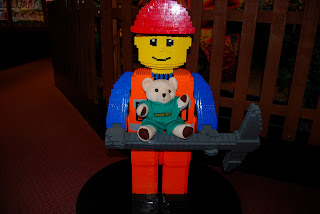 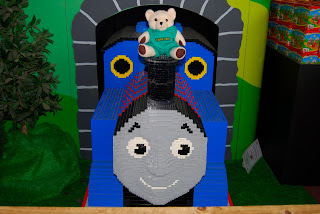 And everyone in the Lego car! 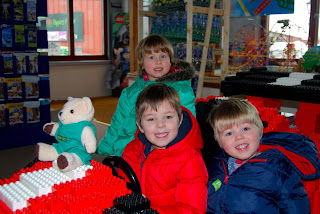 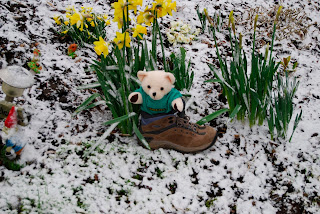 And it looks set to be here for Easter - joy of joys! But we did manage to send Zachary to school on Monday with a completed scrap book which he then had to present to the class (I'm told). We're still waiting for the golden box of goodness to make its way home to us too....
Posted by Kathryn at 9:00 pm No comments:

Mend and make do

Got to work this morning and when I changed my shoes (I don't like driving in heels) I discovered a large hole in the toe of my tights. Large enough for most of my toes to poke through but not large enough for them not to have blood supply cut off by the tights!

Fortunately the hole hadn't resulted in a large ladder snaking up my legs, so rather than abandon the tights altogether (and then have cold, rubbish looking legs), I spent a while trying to tuck the hole under my foot. When that failed, I simply stuck it in place with sellotape. Hurrah! Problem solved, noone any the wiser. I still maintained my air of professionalism despite wearing tights held on by sellotape.
Posted by Kathryn at 7:25 pm No comments:

These are not the droids you're looking for... (spoiler alerts!)

We have begun educating the boys in the way of Star Wars. Now Zachary pretty much thought he knew everything from playing Angry Birds Star Wars and playing with his friends at school - but it was so exciting watching the films with him (and Leo too!). Leigh watched Star Wars : A New Hope with them on Saturday while I was rehearsing, and we all watched The Empire Strikes Back on Sunday (the weather was foul at the weekend - we had planned to go out, but failing that just watched films!).

It was great for me too as I haven't watched the films since an all-night marathon when I was at uni (which I think was pretty much compulsory!) and now having watched the 3 prequels as well, it was good to go back to the originals. I'd also quite like to watch the original originals side by side with our remastered versions - we were 'cgi spotting' in most of it, but it would be interesting to see the differences as I can't remember how the films were when I watched them 18 (crap. Was it really that long ago?) years ago. I do know that I had forgotten just how like Fozzy bear Yoda is! (yes, I know why)

We also had a great time with Zachary and the massive revelation in The Empire Strikes Back. He knew (from playing at school) that Darth Vader is Anakin Skywalker. He didn't seem to make any connection to Luke Skywalker. And then there was that bit in the second film where Darth is talking to the Emperor who tells him that Luke is Anakin Skywalker's son. Now usually that does not have much impact because as watchers we shouldn't yet know who Darth is, but as Zachary did, with a bit of handholding he got there - and the look of surprise was tremendous! Almost as much as when Luke loses his hand!!

So the boys have been playing lots of Star Wars games now (complete with Leigh's light sabre) - Zachary tends to be Luke (either with or without hand depending on what mood he's in!), Leo always wants to be 'a goodie with a gun' so he's Han Solo, (although his R2D2 noise is very good too!) and I end up being 100 Storm Troopers, Darth Vader and Darth Maul in rotation (for information - Darth Vader and Darth Maul both have 100 hit points so for any enemy I 'just' have to count down from 100 each time I'm hit!!!!)

Can't wait for Return of the Jedi now!
Posted by Kathryn at 7:22 pm No comments:

A couple of things...

One of Zachary's friends had a birthday party at the weekend - out came the birthday cake and I'm looking at it...thinking 'red cylinder with what looks like a black hat on top and a face on the side...it can't be....' It was - Henry the Hoover!!!! Apparently the little boy is totally obssessed with hoovers and he looked genuinely delighted with his cake. Brilliant!


And in honour of the weather this week (more snow!)

Posted by Kathryn at 8:41 pm No comments:

The blender has broken!

This is  a major disaster - we have just begun treating ourselves to some delicious icy cocktails and now the blender has broken!!! Fortunately the breaking happened after the iced peach margaritas for this evening were complete. Phew.
Posted by Kathryn at 7:43 pm No comments:

Well, almost - 5 on Wednesday. Zachary had his birthday party today though - we went to Pot 'n' Kettle in Beeston, which is a pottery painting place. He had 8 friends over and we painted, ate cake and played pass the parcel. It was really great and he had a super afternoon!

Here he is with his creation 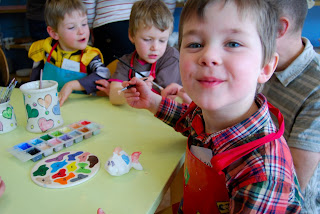 And it was an Angry Birds cake this time around...with little piggy cupcakes for everyone to take home! 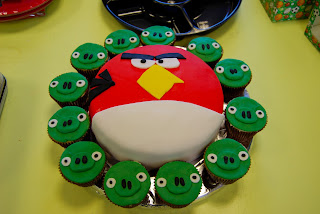 Posted by Kathryn at 8:39 pm No comments: