Despite the rain on Monday, work continues apace in the garden and we now have a completed pergola, a new trellis thingy over the fence on the left and a patio coming along nicely.

Here is how things were looking yesterday in the glorious sunshine 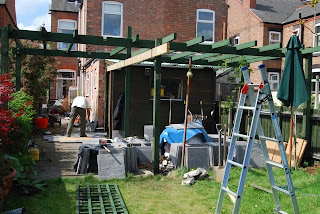 and today in the slightly less generous weather! Fortunately clever men knew it would rain today and a helpful shelter was constructed last night so that the patio could still be done in the dry. 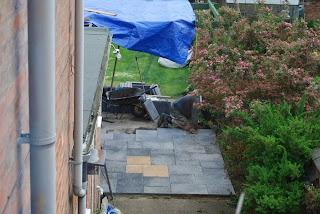 I was hoping to take some photos of the various bits and pieces which have been done, but it was difficult to manouvre myself round the wet cement on the patio! Still, looking gret and hopefully one mre day will see it completed.
Posted by Kathryn at 12:06 pm No comments:

We're having some renovations done to the garden - it's very exciting, although would be a little more so if the rain hadn't started the very day the patio was due to start being laid! 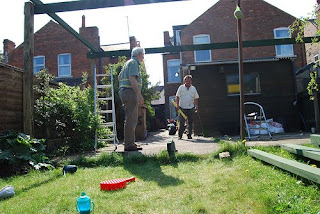 and we're having patio slabs laid over the old concrete there. A new lawn is being laid at some point and L will be having a good rummage through the existing plants and shrubs to see what's to be kept and what lovely new plants we need. We've bought a new set of patio furniture already in preparation and I know L has his eye on a fancy BBQ. Hurrah - let's hope we actually get some sun this summer! 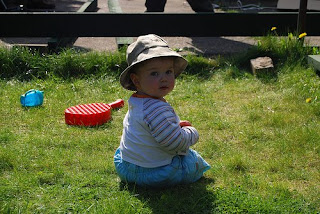 Z enjoying the sun last week - you would not believe the struggles we have trying to get him to keep a hat on!
Posted by Kathryn at 7:17 pm No comments:

I'm pregnant again! I am very excited! We had always said we would start trying again once Z reached 1, but had more in mind it taking a while for me to fall, like it did last time. So we were taken a little by surprise by how quickly things happened this time but really pleased.

Baby is due November, and I've had a bit of nausea this time, but no sickness again so far. We haven't had an official dating scan yet - went for one last week, but I'd got my dates wrong and wasn't as far gone as I'd thought! So sometime November - which has unfortunately put paid to our holiday plans for October. My parents-in-law had booked and paid for all of us (including L's brother) to go to Cyprus for a week in October. Depending on when my official due date is, I could still be okay to fly, but I'd be right on the edge of the permitted time (up to 36 weeks) and I'd be huge by then, so possibly not able to enjoy it as much as at another time. So the holiday's on hold for the time being but with hopes of going sometime 2010 instead.

This does mean that Z won't quite be 2 when the new baby's here and we'll have 2 lots of nappies to deal with! Am hoping that because he'll be a bit younger, hopefully the whole jealousy thing may not be as much a problem and I think it will be good for them to be close in age. One friend did mention to me a possible downside to close ages though - the older child might start coming down to the level of the younger. Hopefully, that'll be something we can spot and deal with if it arises.

In the meantime, mucho happiness here.
Posted by Kathryn at 7:09 pm No comments:

Zachary had his MMR jab 2 weeks ago today. We were warned that it would take about a week to affect him (for some reason the body does nothing with the vaccine for a week and then starts to deal with it) so we were all ready on Tuesday for a miserable little boy. Tuesday came and other than the start of what appeared to be a mild cold and the sightings of another tooth (6th one) there seemed to be no sign of the MMR. Foolishly I thought perhaps Zachary's one of the lucky few. How wrong was I.

Come Friday afternoon he is full fever mode and feeling like he's made of lava! But not too grumpy in himself. Saturday and Sunday however were not good at all. He started off okay both days but soon descended into the land of fever and tiredness. Poor little boy spent much of the weekend in just his nappy cuddling and sleeping on our laps. Mucho application of Calpol and Calprofen helped with the fever but very wakeful nights. Fortunately he didn't have a febrile convulsion or anything scary like that, which are also a possibility when young children get too hot, and seems to be surprisingly common. My friend's little boy had one and I can imagine how frightening it must have been.

Yesterday he seemed much better and was actually prepared to wander around away from the safety of Mummy's lap! But by evening he'd started to get a little warm again - this time we reckon it's the cold starting to hit him though rather than the return of the MMR. Really awful night last night (possibly partly due to being very blocked up) and he's been completely full of cold and feeling sorry for himself today.

So this evening in an attempt to actually get some decent sleep he's had a dose of Calpol, has menthol vapour rub stuff on his chest, and a drop of Olbas Oil on Mr Lion. Fingers crossed.

One interesting thing though - we took his temperature on Saturday to see what was happening and it came out as 39.5C. The directions on the home thermometer said that medical attention should be sought if temp rose above 39C, but we were pretty sure it was all down to the jab and didn't really want to go to the hospital (being Saturday and no GP). Not wanting to just leave it either, I rang NHS Direct and found it a pretty good service.

I went through a kind of call-handler first who I think is there to assess the urgency of the situation ("has he had a fit? is he fitting now? is he choking? etc although if I had been answering yes to any of those we'd have either been in the car by then or waiting for an ambulance!) and then we had a call back from a nurse within an hour. She was very helpful, although you realise just how difficult it is to assess very young children and that you're looking for physical cues and hints as they can't articulate exactly how they feel (for example I had to assess whether I though Z had a headache). She confirmed what we thought, that it was probably just the jab, but also said the fever could last for 3 days so not to go to the doctor until the 4th unless he also starting vomiting, drinking less, or had any other 'unwell' symptoms. She also said that the fever could reach 41C (!) but as long as the calpol etc was still working to reduce temperature after a dose then no cause for alarm. Interestingly she also said Z could have Calpol and Calprofen more or less simultaneously which we hadn't realised. A good experience with them.
Posted by Kathryn at 6:53 pm No comments:

I thought I'd do a bit of updating this evening as I am sans ironing and realised I left things dangling with my last post! Here is the final cake... 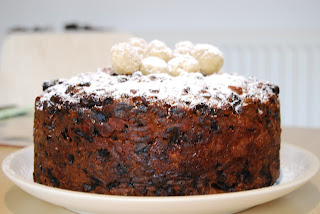 The cake turned out great...the marzipan not so much. The layer cooked inside the cake was fine, but when I came to try and roll out the rest the next day for decoration, a) I couldn't roll it out without it crumbling to pieces and b) it tasted pretty awful and greasy so I think I worked it too much trying to get it into a rollable state. I did persevere and make the apostles for the top of the cake but they mostly headed into the bin and I have discovered that icing sugar hides a lot of sins!

So, keep the cake recipe, ditch the marzipan one. There's another version in the same cookbook which uses an egg white rather than egg yolk in it which I'll try next - and is probably preferable for reasons I'll come on to....
Posted by Kathryn at 6:48 pm No comments:

I decided to make a proper Easter Simnel cake this year - and not just to indulge my love of marzipan! I was going to use the "Easter cake" receipe from the BBC Good Food magazine, although on closer inspection that turned out to be simply some kind of hazelnut cake without the hazelnuts.

So I turned to Rachel Allen and her mother-in-law's Simnel cake. Big heavy old thing this looks to be - similar quantities of stuff to my usual Christmas cake so should be lovely and fruity. Also had a go at the almond paste recipe included in the cake details - hmmmm, looking a bit hard and crumbly at the moment, but I still need to knead it a bit (ran out of icing sugar for that today) so hopefully it'll come together a bit more ready for rolling. I kind of just pressed a layer into the middle of the cake batter for today, but will need to do the top layer and 13 apostles properly tomorrow!

The small disaster? Receipe called for 6 eggs in the cake - after putting it in the oven I discovered I'd only actually used 5. Not sure what effect this will have - cake is cooling in the tin til tomorrow and then we shall see!!! With any luck I might remember to take a picture...
Posted by Kathryn at 7:59 pm No comments: