So, following on from making some mini cupcakes for my mother-in-law's drive-in at the golf club, she asked me if I could bake 70 mini mince pies for another do there.

Leigh spotted a 24 hole mini tart tin in Lakeland, so we bought this in preparation and it also comes with a handy dibber tool to press pastry into the right shapes. I tried a sample batch last weekend and despite a bit of dibber sticking to the pastry, they actually came out okay. Not so for the real run last night.

Yesterday afternoon I put a batch of the mince pies in to try and save time in the evening - 24 spaces in the tin, 3 batches should do it. For some reason, I deviated from my previous batch and used spray oil to grease the tin and cooked the pies at a higher temp for a shorter time. They stuck. Not disasterously, but still didn't come out as cleanly as the sample batch.

Still, I thought, should have time to do another 3 batches in the evening. As the pastry was so short, I thought that this might be causing the problem. So tried another pastry recipe with half butter, half lard. Still no real success, and come 10pm I still had a third batch to prep and bake. The second batch had not come out cleanly either, and thinking it might be because I wasn't leaving them long enough to cool, I left them to the next day. Feeling a bit disappointed, I decided to leave them and the final batch to the next day.

So this morning I removed the last half of the second batch from the tin. Really stuck this time! The third batch were prepared and baked, and stuck even more! Out of the 24 little pies, only 7 were even half acceptable!!! Fed up is not the word. But, still short on mince pies, I made a final fifth batch in the afternoon and went back to my original recipe. I greased the tin with butter and used my fingers to really get the tin as covered as fully as I possibly could.

Pastry still delicate but came out much better than before. Fortunately this meant that out of my 5 batches of 24 I did in fact manage to salvage 80 mini mince pies and finish the process feeling a bit less depressed!!! They're not as good as I had hoped, but neither have I had to spend the entire evening tonight as well baking mini mince pies. Which is a relief.

The annoying thing is that all along the pies tasted great even though the pastry collapsed. I think that if they had been burnt or underdone I might not have minded redoing them so much, but I just could not work out what was going wrong! Still, hopefully this recipe will work again next time and I can try and make the pastry better again. 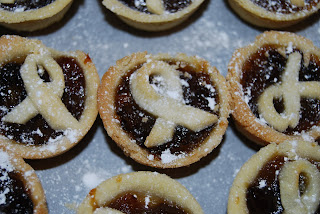 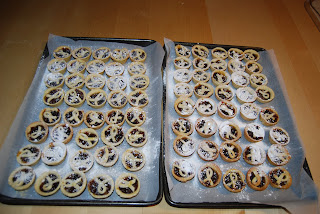 (Oh yes, and please ignore my incredibly rubbish dredging with icing sugar - there are certain things I really should not be allowed to do!)
Posted by Kathryn at 8:15 pm No comments: 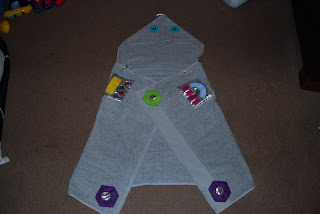 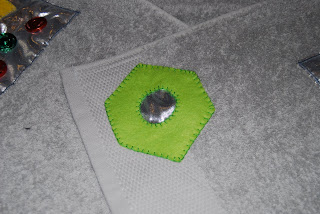 I've added some extra detail to Leo's towel (nuts in the corners and a loop on the hood), and after a few days' trial have made the hood slightly smaller so that it fits better. It even survived its first wash in the machine. Fab.
Posted by Kathryn at 9:44 pm No comments: