Had a great dinner last night - nettle soup followed by fondue and then dandelion pancakes. It was very exciting. The nettle soup was a fab green colour and tasted pretty good - although the cook wasn't sure if he thought it tasted good enough to make up for all the stings he got gathering them! The dandelion pancakes were..interesting! We decided they were slightly overdone, and that might be why they didn't seem to taste of anything but normal pancake batter - although you did sometimes get a hint of what they would taste like. Great to try out though - and the homemade bread and strawberry sauce which were also part of the meal were also really good. I love sourdough. Yum.

I made a carrot cake yesterday 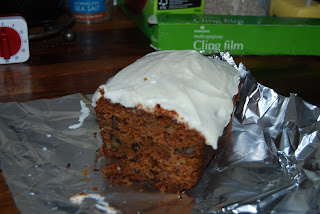 and it's actually turned out pretty well, despite my mare with the cinnamon frosting. It was my fault for not letting my butter soften enough, although I thought 3 hours out of the fridge yesterday would have been okay! Should have microwaved it and consequently ended up (even when using an electric beater) with visible lumps of butter in the mixture!!!! I would still have quite happily eaten the lot, but the look on Leigh's face when he tried it was a clear indication that it should be dumped! The icing I ended up with was the end of the pack of cream cheese (50g) plus a load of icing sugar. And I still had some left, so if I had made the original recipe icing properly I have no idea how that would have all fit on the cake (200g cheese plus 50g butter and icing sugar) - would have almost had icing as deep as the cake!
Posted by Kathryn at 7:42 pm