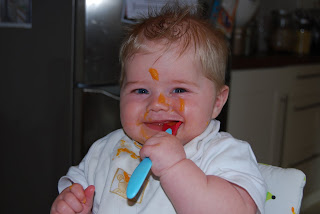 Amazingly, Leo is now 6 months old and it has gone in a flash. We have started weaning him and are about a week and a half in. I'm intending to do all his food from scratch again as I did with Zachary (the purees and main meals anyway) and this week he's tried pear, apple, sweet potato and carrot (not all at once!).

I'm almost embarrassed to admit it, but I really have very little recollection of how Zachary was when he started weaning and how long it took him to get the hang of it (I may need to look back at some old posts!). Leo seems to have spent most of the week grimacing when we get food into his mouth, rolling it around for a while and then pushing it back out with his tongue! I'm looking at this as being because he doesn't know what to do with it, rather than that the purees are foul... Anyhoo, we discovered that although he has very pursed closed lips when we try to feed him from a spoon, he is more than happy to jam a spoon in his mouth which he is holding so we've been loading the spoons and then letting him get on with it. It does seem to be working - the picture is of him enjoying some sweet potato this evening. Leigh and I were both pleased to see at least one mouthful being swallowed...although some of it came back up about half an hour later! Still, it's progress and he seems to be loving it.
Posted by Kathryn at 7:22 pm