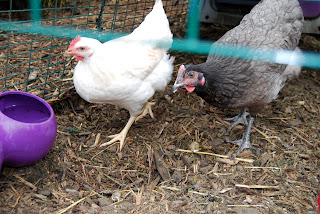 Well, we've done it - we have bought some new chickens! It was very exciting, tinged with sadness that we no longer have Dax, but the boys threw themselves into the challenge. We visited Hens for Pets this morning and the boys chose an Amber chicken - now named Emma Frost - and a Smoky Blue - now named Hex. The boys' frame of reference for name choice at the moment is comprised of X-Men and the Skylanders computer game...please note we did not go with "Wolverine" or "the Beast" as potential names, funny though they would be for chickens!

Leigh had read that we should keep them separate from Bubbles for about a week before introducing, but the Hens for Pets lady suggested that actually just a day would do and we could mix them tonight. The potential issue is how Bubbles will get on with them, and the inevitable 'pecking order' squabble which we'll have to go through. We've kept them separate today and have put them together now for roosting, although noone's roosting (suspect Bubbles, who would normally be in bed by now) is too interested in what the others are doing!) - Leigh is sitting outside keeping an eye on them and making sure the new chickens know where to go. We have borrowed a rabbit hutch and run from a friend so if there is too much arguing tonight and they don't settle, Emma Frost and Hex can sleep on their own until things calm down a bit.

But they are lovely chickens, and so far, apart from a few pecks, Bubbles is behaving herself so we shall see how the night goes. And in other chicken news, Bubbles laid an egg this morning!!! Woo-hoo! 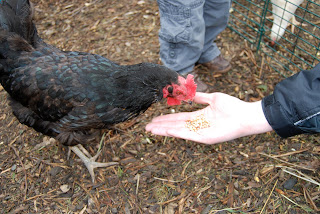