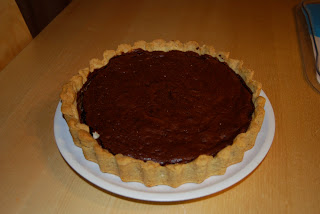 I have been wanting to try this since we received the magazine and as we have friends over for dinner tonight, it seemed like a good opportunity!

Wasn't too bad to make, although (and I'm blaming this on the heat!) the pastry was still very soft and sticky even after half an hour in the fridge. I could roll it out, but it was too soft to lift, and when I tried to just turn my rolling out board upside down over the tin to kind of drop it in, it just stuck to the board and needed scraping off! So I put the pastry in as a lump and pushed it out with my hands. Consequently I suspect the pastry layer is going to be quite thick!

I'm not sure I got the caramel quite right either - the recipe said to let the sugar/water mixture boil until it was amber coloured, which I did, but the final caramel (after adding butter, cream and golden syrup) looked a bit pale...

Finally on the 'should have done better' notes, the topping has come away from the edges of the pastry as it has cooled so I think I may also have slightly overcooked it. I found it very difficult to tell whether the topping 'had formed a crust' so to be safe I left it in a few more minutes - I suspect possibly a few too many! Still, it looks and smells great and my husband says the pastry tastes good so we'll see how we go.

I bought some vanilla ice cream to eat with it so we have a back-up pud!

It was yummy! Not overcooked at all - lovely soft chocolate layer, crunchy hazelnuts and sweet caramel at the bottom. Pastry seemed a little powdery at the top, but it sliced well and came away from the tin with no problems.