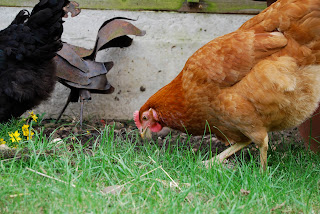 Sadly one of our chickens, Dax, died last night. I found her this morning and it looked as though she had peacefully passed in the night.

Strangely, it was Bubbles, our other chicken, who has been ill recently but she rallied after some antibiotics. We had noticed that Dax was not quite herself but she didn't seem as ill as Bubbles had been and the vet didn't notice anything major. She had had a bit of a problem with her crop and we think maybe that combined with her still being in moult and waiting to regrow feathers may just have taken its toll on her.

The worst thing was disposing of the body. Leigh read that we needed to just put her (double bagged) in our usual household bin, but as it's Friday today, the bin men were due and they come early! Leigh saw the truck down the road so we rushed through it, got out in time and then the truck drove the other way! Hardly a dignified farewell.

Bubbles seems fine though. although she should not be a flock on her own for too long, so we are going to look at chickens tomorrow. It is also the first time the boys have come into contact with death so we were a bit nervous about telling them - although secretly hoping it might be an opportunity for us to shed a few tears too. However when we told the boys at lunchtime, although Zachary seemed to understand he wouldn't be seeing Dax again, he was more excited by the prospect of buying new chickens and just kept asking whether all her feathers had dropped off! (no, and not because we stuck them all back on, Zachary!). He did also ask whether we could call one of the new chickens Dax - although I said it would be best to have new names, considering the origin of her name (Dax from Star Trek), it seemed oddly appropriate that it might continue.