When I was looking for the Currant and Oat biscuits recipe on Time to Cook Online, I came across a recipe for Banoffi Pie Cupcakes. These looked wonderful and I love banoffi pie - the real stuff with real bananas, none of this banana mousse rubbish!

I remember having banoffi pie for the first time at a friend's house and she had made it from scratch (including boiling the tin of condensed milk for 4 hours to make the toffee layer) - it was so delicious, and that's the recipe I use now. Although I have to admit I tend to cheat and use the tinned caramel now rather than boil up a tin myself. This is partly because I am lazy (!) and partly because when I used to make it myself I would always end up letting the pan boil dry and then ruin the pan. I had a 'boiling condensed milk pan' at home for a good while (in a similar way to my Mum who had a 'making playdough' pan - which in a previous life was the 'boiling handkerchiefs pan')!

My other banoffi pie memory is making one for the Gilbert & Sullivan picnic at the end of my third year at university. Each year the society went to Monsal Head in Derbyshire and walked down to Monsal Dale for a picnic and game of rounders. The year I decided to make (and bring in its full flan dish!) a banoffi pie for the picnic it absolutely poured down! Trying to negotiate the walk in the rain trying not to drop the pie was quite an effort. I think there's a picture of me around somewhere sitting with it under an umbrella, but I couldn't find it upstairs last night so I may well have imagined it (just the picture - the whole banoffi pie thing is real!)

Anyway I digress - I have linked the recipe above because it's quite long and complicated. The cakes are great, but aren't something you can whip up in half an hour!

So my comments on the recipe - firstly I cheated on the caramel filling and used a tinned one although I did make the pastry myself so I don't feel too bad! I do think that I left it a bit thick after rolling though and it was not as golden coloured when it came out of the oven as I would have liked. Fortunately it was cooked enough to avoid a soggy bottom - and thus I hope to escape the wrath of Mary Berry! The banana cake was nice and easy to make although I had enough batter left over for another batch of small muffins, so I don't know whether Mary-Anne just has a massive muffin tin or mine is particularly small! Also I think I overfilled a little - say hello to the most inconsistently-sized cupcakes you've ever seen!!! 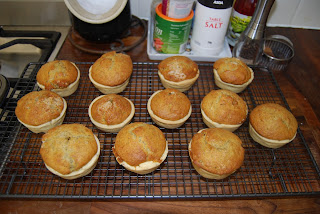 I used an apple corer and a piping bag to get the caramel in and that worked brilliantly. I managed to overwhip my cream, which wasn't a total disaster, but I wasn't at all sure about the coffee in it. I may have added too much but found it too strong - fortunately I had some cream left and whipped it up in the same bowl I used for the coffee cream and there was just enough flavour to make the new batch slightly coffeey but not too much.

I had a bit of trouble drizzling the extra caramel, and I had to steal banana chips from the granola (because I forgot to buy them!)...but I was happy with the finished product... 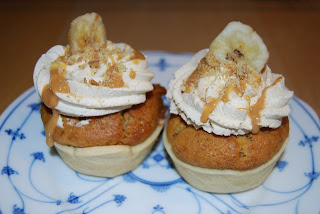 I fancy trying them as a slightly more simple cake - not using pastry, and then just having plain cream and possibly chocolate sprinkles on top? But the caramel in the middle stays!!