New roof in the making!

We had a couple of slipped tiles on our roof over winter, which resulted in a nice damp patch and some mould in our bedroom, and a visit from a roofer who told us there was wide-spread nail fatigue. This apparently means that the only thing holding our slates on the roof...is the weight of the slates! As we've only been in the house a year and a half, it was clearly an issue when we bought it, but nothing was mentioned in the survey. Annoyingly, when we investigated further it turns out that even with a full survey, a detailed examination of the roof is not undertaken, because the surveyors will not go up long ladders. Your roof only gets looked at (well, more than a cursory glance and assessment from street level) if you ask for a specific investigation of it.

Having survived the rest of the winter without killing any passers-by during freak high winds, the roof repair work is finally commencing -yay! Scaffolding went up yesterday, 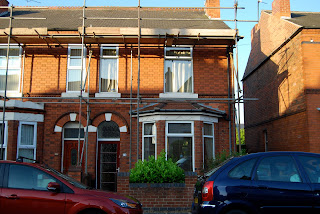 no activity today, so I expect the builders will be here Monday. Maybe! It's pricey, but not really something we can leave. The funniest thing is that when we told next door what's going on, he decided to have his roof done at the same time - not because he thought it really needed it doing now, but because he was worried about our works affecting his roof. When the roofer went up to survey, he found next door's roof was worse than ours!
Posted by Kathryn at 10:13 pm

Oh, what crazy timing - you took the roof off and then the heavens opened!

Thank goodness the tiles didn't hit anybody. Calling the attention of the roofers in your area to fix the problem right away was the right thing to do. Last winter, it snowed very heavily that several of my roof tiles slipped down. Luckily, no one got hurt, and the day after the snow stopped, I called the roof repair (New York) in our area. There was a lot of good roofing companies in New York to choose from with majestic offers and services, yet affordable and high quality.