Give them a couple of years...

I'm starting to get a feel for what it's going to be like in a couple of years' time when Leo is mobile and talking. Thick as thieves with his brother. Up to no good! Yesterday at dinner, Leo started blowing raspberries - not a lot you can do about that as he's only 6 months old. So Zachary starts to copy him and there's a good 15 minutes or so where Leo blows raspberry, Zachary shouts 'again!' and then blows raspberries himself. Sadly Leigh and I are not fit to be parents. We just sat there in stitches watching the pair of them!

I think Leigh's dad got it just about right when he said Leo was going to be Zachary's henchman. He absolutely adores his brother and I'm going to have to keep a close eye!

Had a fairly quiet day today - Leigh's off work for the week and we did try to plan in some outings. Today was intended to be Rufford Country Park, but the weather;s been a bit meh all day and we didn't really fancy walking around in the nearly rain. So instead we went to IKEA this morning and mooched around the house in the afternoon. IKEA was fun - for some reason they've chosen to display some of their sofas in pairs - one on the floor, and one raised on a pedestal directly behind it. To Zachary, this arrangement just looks like stairs! And he climbed them!

Also, work on the roof has finally started - yay! Unfortunately it looks as though one of our chimney stacks is completely beyond repair so that's going and the other was being repointed as we arrived home from IKEA. We now have scaffolding at the back of the house and here it is along with a couple of 'before' shots Leigh took earlier today - the picture of the chimney is the one in question. The rather more worrying thing is that the roofer has told us he's seen some cracks in our flat roof over the kitchen and that the roofy bit of the dormer window for the loft is also not good. Well, that will be a job for next year... 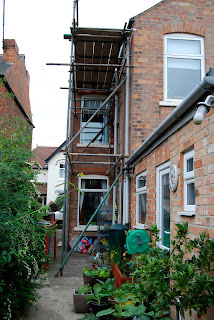 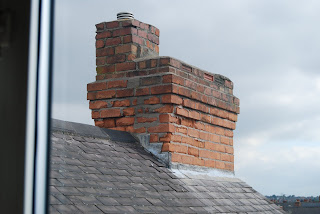 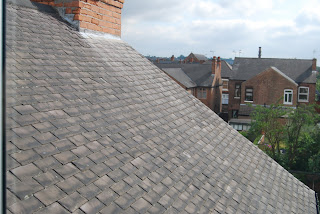