I have been needing to sort out our top bedroom for ages. The bed was still out from our last set of visitors (mid-May), there were pictures to be hung lying around and a huge pile of 'things to put away' at the bottom of the stairs. Leigh is out this evening so it is the perfect opportunity.

So, I've put the bed away and tidied the pictures into a stack (not hung them though...). I've emptied and sorted out 6 or 7 Crafty Creatives boxes and put aside some bits I think my friend will be able to use. A lot of the bits in the craft boxes I can see myself using, but some are a bit too random. My friend likes dabbling in crafty stuff too so I've sorted out some bits she might like. Put away a stack of birthday cards (from January...) - I'm trying now to only keep a maximum of 5 cards each year, that is particularly special or pretty ones. I'm still going to have to get rid of them eventually but whilst there's room in my box of special things I can keep going! I put away books, tried to sort the craft drawers in the desk but gave up and just ended up shoving a load of bits in the top drawer. So that will need going through again.

I looked in the loft cupboard - this is a project for another day (videos needing to be turned into DVDs lurk in there are the back somewhere behind cots and old computer game consoles) but there are 2 rather large stacks of empty boxes in there and we seem to just accumulate more and more. Boxes from appliances, computer stuff, kitchen stuff, board games, Crafty Creatives... I thought it would be a good idea to just put them all in the bedroom and get Leigh to look at them with me and decide if we could get rid of any. When I had nearly covered the floor and there were still boxes in the cupboard I gave up!

But, one other great thing - I refound some dinosaur material I asked my Mum to get for me. A while ago now she made quilts for the boys' beds and Zachary's had a great dinosaur fabric on it. The daughter of a friend of ours is mad about dinosaurs and has a dice game which is crying out for a drawstring bag! So I asked Mum if she could get me any more of the fabric and she did - which I then put in the loft and have spent the time since then trying to ignore it because I couldn't see, let alone reach my sewing machine. I was very organised tonight though, got the tiding out of the way and made a drawstring bag for the game and another little bag from the material. I decided to use ribbon for the handles of the bag rather than make them from the material itself (which is what I have been doing in the past when I've made these bags) but I couldn't for the life of me remember how I fixed them on properly with all the hemming and stuff. So it's a bit of a cobble - artisan I think is the word!

Here are the fronts (well...either side could be the front really!) 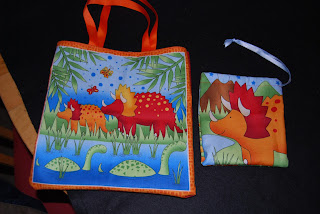 And the backs. I hope she likes them! 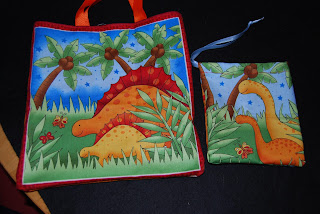