I have come across 2 new creepy crawlies recently. I have taken to looking out for bugs because Zachary loves them and it's a good distraction if he's not really listening or enthused about what we're doing...

So, in a bowl of damsons which we'd been given by Leigh's dad, I spotted a new spider 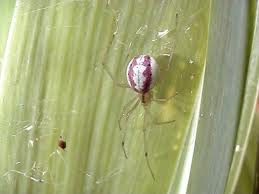 This is a picture of enoplpgnatha ovata which I'm pretty sure is the one we saw. Apparently it often builds webs on plants, can be lots of different colours, but the ones with the red stripes are nicknamed 'candystripe.'

Then a couple of weekends ago we went for a geocache in Bignalls Wood. We've never been into the wood before, despite it being opposite one of our occasional haunts in Staunton Harold (it's right opposite the garden centre and Ferrers Craft Centre). Had a lovely walk there and saw tons of these little fellows (well...as with the spider, I have used random searching on Google using my remembered description of the creature to locate a likely suspect...) 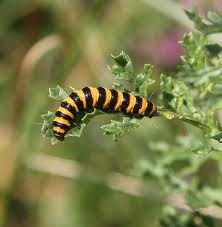 This is a cinnabar moth caterpillar, which feeds almost exclusively on ragwort. Zachary was so interested in these that he got very concerned to make sure that all the ones he saw on the path were picked up and put on the grass at the side. Unfortunately there seemed to be hundreds of them!!! I think the promise of chocolate or sweets or something eventually distracted him!
Posted by Kathryn at 7:18 pm