My friend Rachel made a delicious gooseberry and elderflower cake ages ago, and I have finally managed to purloin the recipe from her - hurrah! So yesterday, in a 'trying to use up eggs' frenzy (only partly successful!) this was one of the things I made (despite now also having half a batch of cupcakes and the remains of a batch of diggers to eat up...).

I have reproduced the recipe as it was provided to me, although I'm afraid I chickened out and have only made a standard 2-layer sponge cake. I am seriously bad at cutting cakes horizontally and will leave that for a time when I need to make a fancy cake - this was really more of a try it session to see if I can make mine half as nice as Rachel's! I therefore, at the last minute, realised that as I would only be buttercreaming 1 layer of cake and not 3, 175g butter was going to be far too much. I used 75g butter and about 3 times as much icing sugar (although to be honest I didn't measure it precisely, just went by look and taste), and that still left me with some over and a fairly thick layer of cream. I reckon 50g butter should be about right and I'll try that next time.

We have a small amount of elderflower cordial left from this year's batch so that has gone in, although no gooseberry jam. I went to get some from Asda, but they had none, so I bought rhubarb & ginger instead which I hoped would be an okay substitute. However today, on visiting the Courtyard in Draycott (has a couple of very nice gifty shops - Vintage Bluebird and Avado - and a great cafe Pumpkinz) I found a selection of homemade preserves including gooseberry jam, so bought it feeling quite pleased! But when we visited Ikea this evening Leigh found some in their food section - £1 cheaper. Bah! 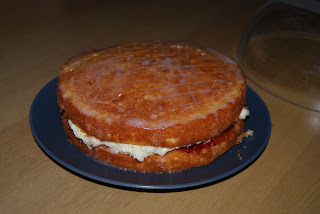 Preheat oven to 170C/gas 3/325F. Grease and line 2 x 20cm loose-bottomed cake tins. Cream together the butter and caster sugar. Gradually add the 3 eggs, whisking all the time. Fold in the flour and baking powder, then mix in the elderflower syrup.

Divide the mixture between the tins and bake for 20-25 minutes until risen and springy to the touch. Cool on a wire rack.

Make the butter icing by creaming together the butter and icing sugar. (I also added a splash of milk) When the cakes have cooled, cut each one in half horizontally. Spread each layer with butter icing and jam, then sandwich together.

For the topping, mix together 6 tbsp icing sugar with 2 tbsp elderflower syrup and drizzle over the cake.
Posted by Kathryn at 7:01 pm