A present for Dad

This is about a present for my Dad's birthday, so if my dad is reading this (although very unlikely) - STOP NOW!!!

I was a bit stuck for ideas. My Dad enjoys cooking and my sister suggested getting an apron with a photo of the boys on the front. Great idea I thought, so this afternoon I set about trying to get a photo.

I got them both into aprons, Zachary has a matching chef's hat so that was donned too and I got out some mixing bowls and plastic spoons and whisks to set the scene. I explained that they're doing some pretend baking so that I can get a picture for Grandad's birthday. I start to take one or two pictures, quickly realising that both boys have ants in their pants and aren't going to sit still for anyone! Blurry photos coming out.

Then Zachary decides that he needs to know where the pretend eggs are for the pretend baking. Specifically where they are. 'They're pretend, they can be anywhere,' won't cut it! So I tell him the eggs are on the table by the bowl and we continue. Then I decide the boys are too far apart so try to move them closer together. Zachary then won't smile and pulls mardy face 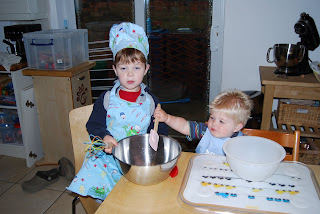 and also at this point, now that he's within range, Leo decides that actually, Zachary's baking bowl and spoon selection is far better than his. Cue stealing of bowl and fighting between them over who gets to use which utensils. Nice. 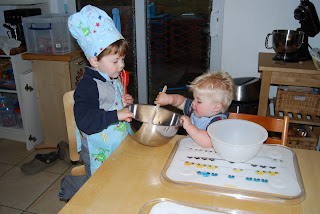 I still wasn't totally happy with the pictures I had so tried again from another angle, by which time...well you can see! 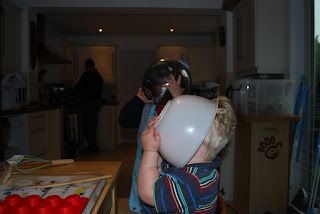 Gave up, although found this picture in the results 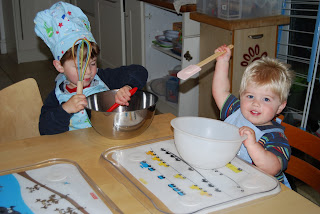