We went swimming today with the boys and Zachary discovered he could swim on his own with his armbands on! This is great. I think that previously he's been a bit nervous of trying on his own (that is, with noone holding him under his shoulders for support) but found out quite by accident today that he could float in the pool with his armbands on. So he tried this a few times, just lifting his feet from the floor and floating, and then was encouraged to have a go at kicking his feet and moving his arms...and then no stopping him! It was brilliant. Just now need to try and repeat this in a swimming lesson and we could move towards him having a go without the bands on at some point.

And he's also had a haircut. It's much much shorter and he almost looks like a different boy but after a couple of days bedding in, I think it looks fab and has considerably cut down the time spent washing and drying it at bedtime!!!!

Here it is 'before' on Easter Sunday 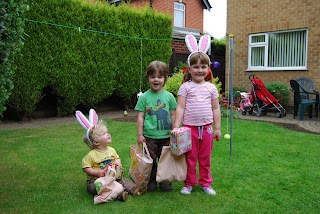 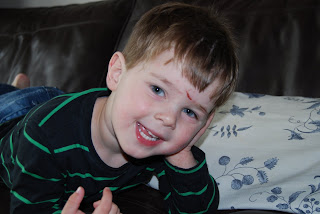