So my next challenge from the Great British Book of Baking is Battenberg Cake. Now I love marzipan and love Battenberg and thought I would give this a go.

The cake was named in honour of the marriage in 1884 of Queen Victoria’s Granddaughter, Princess Victoria of Heese-Darnstadt, to Prince Louis of Battenberg (they later changed their name to the more English-sounding Mountbatten). It is thought to represent either traditional German two-tone cakes, or the four Battenberg princes (Louis, Alexander, Henry and Joseph).

My interesting moments for this cake started with trying to work out how to divide my 18cm square tin into 2 halves with foil. I had absolutely no idea how the book envisaged this happening and you tube was no help either. Anyway I bodged something which worked reasonably well (would have worked better if I had actually placed it in the centre of the tin!), but think next time I might try card wrapped in foil as it should give a more sturdy wall. Also I was surprised at how small the cake was - although typing that now I don't think it was any smaller than the cakes you buy in the shops, just that compared to say a Victoria sponge, it does seem smaller... or maybe we're just greedy and eat huge slices of cake!!!

The cakes rose too much in the middle so I need to remember next time to try and put a depression in each rather than just levelling off. When I was preparing the cakes to put them together, it felt as though I was almost cutting off more than I was leaving! And my marzipan stuck to the table. All was going well until I tried to lift the cake from preparation area onto a plate and left half the bottom of the marzipan behind. Errrr - see photo. Also I might try more marzipan next time for a sightly thicker layer as I love the stuff. Had to throw my apricot-smeared off-cuts away quickly, otherwise there was the distinct possibility of me rolling them into a ball and eating like an apple... I’m not kidding.

Here is my divided tin on leaving the oven

The finished product showing the 'good' side 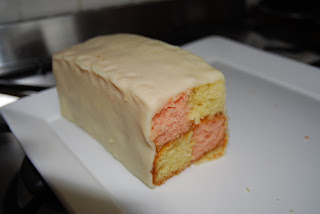 and the not so good side! 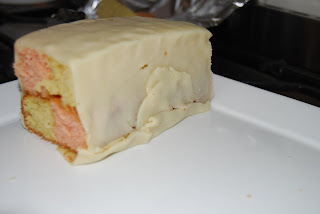 The sponge came out really well though and it all tasted great.

Also need a 20 x 15cm Battenberg tin or an 18cm-square cake tin, greased with butter and the base lined with greaseproof paper, and divided into 2 halves with tin foil.

Preheat the oven to 180C/170C ish fan/350F/gas 4. Put the butter and sugar into a bowl and beat until light in colour and very creamy in texture. Mix the eggs and vanilla, then gradually add to the butter mixture, beating well after each addition. Sift the flour into the bowl, add the milk and gently fold the ingredients together using a large metal spoon. Divide the mixture in half. Spoon one half into 2 sections of the Battenberg tin, or into half the divided square tin (make sure the foil divider is folded over the side of the tin so it is well secured), and spread evenly. Add the food colouring (no Zachary, adding food colouring is not something you can help with!!) a few drops at a time to the second portion of the mixture, mixing it in well so there are no streaks; the colour will tend to darken on baking so don’t overdo it. Spoon this pink mixture into the remaining sections of the Battenberg tin or the other side of the divided tin. Spread evenly, then bake for 25-30 minutes (28), until firm to the touch. Remove from the oven and run a round bladed knife around the inside of the tin and the dividers to loosen the sponge, but do not unmould. Stand the tin on a wire rack and cool completely.

Carefully, turn out the sponge and remove the lining paper. If the cakes have risen unevenly in the oven, trim them with a long sharp knife so that the short sides are exactly square. If using the square tin, cut each sponge in half length-ways. Roll out the marzipan on a work surface lightly dusted with cornflour or icing sugar to a rectangle measuring 20cm x 30cm. Heat the apricot jam with a tablespoon of water, then push through a sieve to make a smooth puree. Brush one long side of one strip of pink cake with jam and set it jam side down on the marzipan so that it is lined up along one short side. Brush the 3 other long sides of this strip with jam and set a yellow-coloured strip, lightly brushed on the long sides with jam, next to it and another one, also brushed with jam on top of it. Lightly brush jam on the last pink strip and place it on top of the yellow one to make a 2-layered chequerboard pattern (can split the 4 pieces again to make a 4-layered pattern). Wrap the marzipan neatly over and around the whole cake, leaving the ends visible. Trim off the excess marzipan and slice off the ends to neaten. The top can be left plain or pinched along the edges decoratively.
Posted by Kathryn at 7:21 pm