I have recently seen two lemon cake recipes which have caught my eye. The first was a lemon fondant cake in the April Good Food magazine, and the other was a lemon coconut cake in the latest Asda magazine. My brother-in-law has a birthday tomorrow and I thought this would be a good opportunity to try out one of the cakes...saving the other as an Easter cake!

Now, I made the cake as per the recipe, but have decorated it differently, so have not included their description of decoration in the recipe below. The recipe as printed had a marzipan layer directly on the cake (held on with more lemon curd), then the fondant icing, which is coloured yellow and has coloured marzipan roses and leaves on the top. My cake is for a boy. I went for very simple - white fondant icing with his name piped on! I think I did not make the icing quite thick enough though as most of it seemed to drip off the bottom of the cake - however a change of plate when the icing had mostly set, has made everything look much better! My only issue with making the icing thicker is whether I would then have had a problem getting it spread over the cake. Maybe, although there was a lot of icing. As you might guess, my problem with icing is usually one of finesse - slightly too heavy-handed and I just end up pulling up the edges of the cake and having icing spotted with cake crumbs!

Also, the cakes were pretty moist after the drizzling of the lemon mixture and it was pretty hairy transferring them to a plate and then again to another plate, especially as it's a triple layer cake. I was convinced I was going to leave half the cake behind. At least it's all ready now. 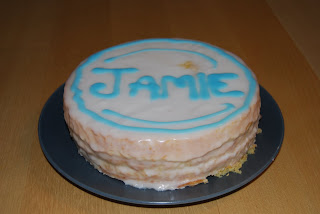 For the icing - fondant icing sugar and some blue food colouring

Heat the oven to 180C/160C fan/gas 4. Grease and line the bases of 3 x 20cm sandwich tins. Beat the butter, sugar, flour, eggs, almonds, yoghurt, all the zest and half the lemon juice together. Divide between the tins and bake for 20-25 mins until a skewer poked in the centre comes out clean (you may want to change the shelves around after 20 minutes to ensure the cakes cook evenly). (the cakes came out much paler than I was expecting but the skewer came out clean so I trusted that. Haven't tried the cake yet to check it's cooked - I'm hoping it's the use of the yoghurt which affected the colour). Mix the juice of the second lemon with 1 tbspn sugar, poke the cakes a few times with a skewer and drizzle over. Cool in the tins on wire racks.

Sandwich the 3 sponges together with the lemon curd and decorate as you wish!
Posted by Kathryn at 7:10 pm

Drat! Cake given away and forgot to take photo of cross-section. It was incredibly moist - delicious, but possibly a tad undercooked in the centre. Not enough to stop enjoying it though!!