It is finished and I'm really pleased with the result. I added ears, a nose and whiskers to the hood, 4 paws and a tail to the main towel. As I mentioned in a previous post, I did have some trouble appliquing the paws, but found the answer was just to decrease the thread tension further. Down at 1, the stitches came out much more evenly, and although it was still difficult to feed through the needle, I used some curtain lining material to back them behind the main towel and this seemed to provide a smoother surface for feeding through the machine. I have since discovered there is such a thing as stabilising fabric which actually washes out and is useful for appliquing towel as you can get an even smoother surface.

I found out a lot of this in stages as I was attaching the paws - so the first one is a bit dodgy, and the last one is pretty good!

I've also attached a button and loop to this towel, which I found in the latest issue of Making magazine - they've got a hooded towel 'make' in there and the button is great. Zachary likes it so much he's ordered one for his bear towel. I also think that using the button may help me make a better fireman towel, because I'll have something more resembling a coat for buttons without having to attempt another poncho towel and get myself wound up with the double bias binding and making sure the head hole is the right size!

Here's a photo of the towel laid out 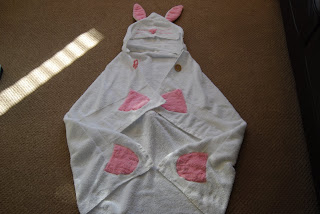 And modelled by Zachary 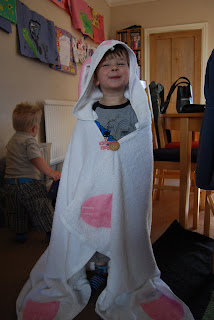 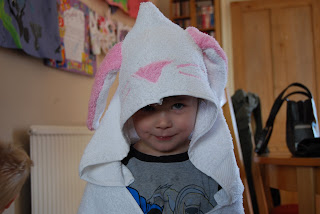 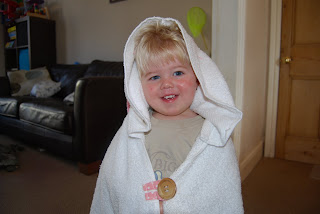