After my cupcake making and decorating course, I was inspired to try a few random cupcakes, this made all the easier by one of the tips I picked up - using the same weight of ingredients as the eggs. So it is pretty straightforward to make a 1 egg batch of cupcakes, you just weigh the egg and then use that weight for everything else. I needed to remember to reduce the amount of other liquid (like flavouring) going it, as we used 3 eggs on the course, but otherwise this worked well and meant that we could produce 12 cupcakes, 4 each of 3 different flavours. Great!

Leigh, Zachary and I made a batch each - Zachary wanted chocolate cakes, I tried out my idea for an amaretto and cherry coke cake, and Leigh took charge of a margarita cake.

Here is Zachary's chocolate cake - when we got to the stage of adding the flour, we added a tablespoon of cocoa powder first to the scales, then topped up to the required weight with flour. It came out really well, and apart from a bit of mixing (and my hand in the finish on the icing), Zachary did it all himself! 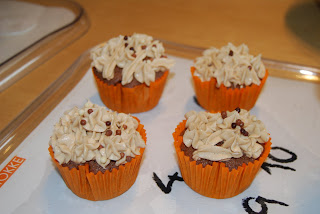 The next one is my idea for a margarita cupcake, which Leigh made - lime in the base and tequila added to the icing. 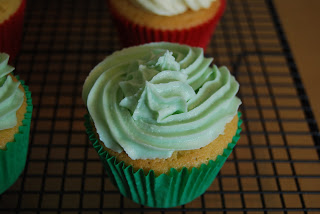 The lime cake was lovely, although I only suggested using lime juice (as the limes had previously been used in some strawberry and lime margaritas...) and I think it would benefit from some zest as well. The icing - well, this might sound a little strange but I could feel the tequila more in the back of my throat than actually taste it. May need to add more if I want to keep it alcoholic, or it could just be a lime cake.

I love Amaretto and cherry coke to drink so thought I'd have a go at this combo (with apologies for the slightly wonky icing!). 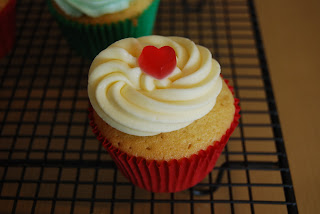 The cupcake course leader mentioned that she makes Bacardi and coke cakes, and just uses a tablespoon of coke as flavouring in the cakes so I thought I'd give this one a go.

Couldn't really taste the cherry coke very much so I would be inclined to try out cherry syrup next time. The amaretto in the icing, again ended up more a suggestion than actual flavouring, so I added a little almond essence, which enhanced it.

However I think in the future, unless I needed it to be alcoholic, I could keep it just as a cherry bakewell cupcake and use essence only.
Posted by Kathryn at 7:19 pm