Rah! Baked on Tuesday and came out a success! Leigh's homemade ice-cream was ace (vanilla and strawberry), the meringue was gorgeous and it was accompanied by Nigella's butterscotch sauce. Was very nerve wracking watching it in the oven trying to work out if I could see ice-cream seeping out of the bottom, but was all fine. We served it to table on the baking tray it had been cooked on but it would probably have been better if it had been transferred to a plate first. As soon as the first slice was taken, the rest slid slightly and came into contact with the hot baking tray causing the ice-cream to start melting and the meringue to lose some air. Not disasterously, but it would have kept a bit longer had we transferred it immediately.

It was totally yum! Best part is that it won't keep, so we (sadly!) had to eat the whole lot in one go. Shame.

Here's the ice-cream on biscuit base 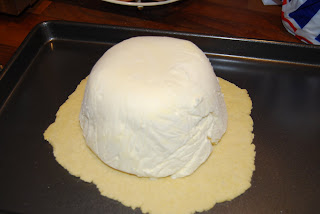 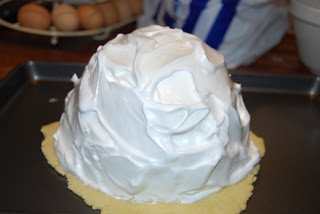 On leaving the oven 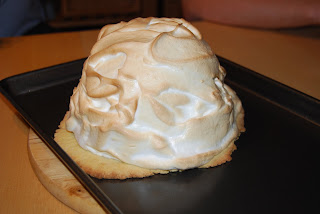 And a slice of loveliness! 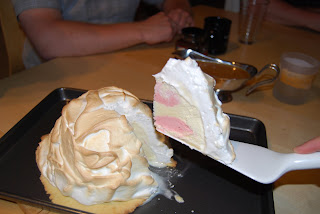 I'm going to set out the recipe as I made it, so there are slightly different instructions to Rachel's.

For the biscuit base -
25g butter at room temperature
25g caster sugar
1 egg yolk
1/8tsp vanilla essence (we've got a jar of vanilla sugar at home [caster sugar with some left-over vanilla pods in it], so I just used that instead of adding the vanilla essence.)
60g plain flour
Pinch of baking powder

When Leigh made the ice-cream, he lined the pudding basin with clingfilm, and then set the ice-cream (after churning) into the bowl, wrapped the cling film over the top and then put the whole thing into the freezer to set. This meant that when I came to put the pudding together, I didn't need to mash the ice-cream into shape and leave it to re-freeze. Also the ice-cream came out of the bowl easily later, without messing about waiting for it to thaw slightly, using hot water to help ease it out etc.

Making the biscuit base - need to do this ahead of time as it has to cool completely before you put the pudding together.

Cream the butter until soft. Add the sugar and beat until the mixture is light and fluffy. Add the egg yolk (and vanilla essence) and beat until combined. Sift in the flour and baking powder and mix until all the flour is incorporated. Bring the dough together in a ball, slightly flatten it with the palm of your hand and place in a plastic bag or wrap in clingfilm. Allow to chill in the fridge for at least 30 minutes.

When the dough is ready to roll, preheat the oven to 180C/gas 4/165ish fan. Place the dough on a lightly floured work surface, sprinkle on a bit more flour and roll out keeping it round and giving the dough a quarter turn each roll to prevent it from sticking to the surface. Roll out the dough to a thickness of 1cm.

Measure the diameter of the pudding basin and cut out your dough 3cm wider than the basin. (see my careful cutting on the photos! Not.) Carefully lift the dough onto a large baking tray lined with parchment paper and bake in the oven for about 8-10 minutes or until pale golden. Allow to cool, then transfer to a wire rack to cool completely. When cold, return it to the baking tray.

Before you prepare the meringue, preheat the oven to 220C/gas 7. In a large, spotlessly clean bowl, whisk the egg whites until soft peaks form. Add half the caster sugar and the cream of tartar and whisk until stiff peaks form and the meringue is satiny and glossy. Fold in the remaining sugar with a metal spoon.

Ease the ice-cream onto the biscuit base. Quickly spoon the meringue thickly and in peaks over the ice-cream, spreading it down to the base and covering the edge. Place immediately in the centre of the hot oven for 3-4 minutes or until the meringue is set and pale gold in colour. Serve straight away!
Posted by Kathryn at 8:58 pm