We had a gas fire in our middle room taken out a few months ago in preparation for a piano to sit against that wall eventually, which left us with a lovely hole into the chimney breast. Until last week this was covered by an old piano (which unfortunately has now been consigned to the realms of "too expensive to be fixed, and even if we did wouldn't hold its tuning because it's just too old") and until today was graced with some stuck on cardboard 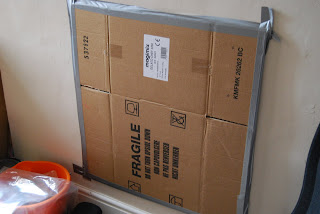 to prevent a certain little adventurer trying to see what's in the wall.

(and if you think he wouldn't try, here he is in the new BBQ 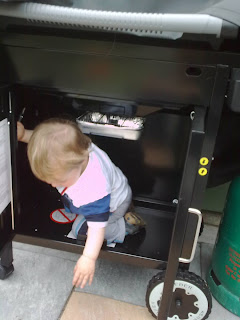 and in the wardrobe at Center Parcs... 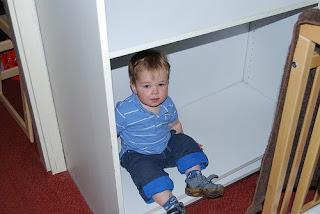 A friend of ours has kindly agreed to both brick up the hole and then plaster over the top of it, and suggested (I suspect in jest!) that we put a time capsule in the hole before it's sealed forever. We both took to this idea and put together a little box of goodies. I think we got slightly carried away imagining that the box will lay dormant for hundreds of years (L considered explaining that we're wearing hats in the photos because it was a hot day, not because there's been some kind of ecological breakdown and they're needed all the time...) although more likely is that someone will want to expand a road through the town in a few years' time and the house will come down then!

Anyway, in the spirit of a time capsule, here's a piccie of the stuff we put in it : 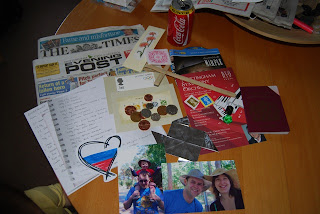 So, we have (in no particular order)

- photos of the clan Caple
- postcards of some Royal Mail special issue stamps - a Harry Potter one and a Bejing to London handover for the Olympics one
- a Marple DVD
- a palm cross
- some currency
- front pages of a national (The Times) and local (Nottingham something...!) paper
- first and second class used stamps
- some dice
- example of origami
- example of cross stitch (our respective hobbies)
- a Eurovision heart from our party a couple of weeks ago
- favourite recipes - Christmas cake and elderflower cordial
- a Coca Cola can
- one of my old passports
- a flyer for the next Nottingham Symphony Orchestra concert

I think that's everything! And here is the box safely esconced in the wall, which has now been bricked up. There's no turning back!!!!! 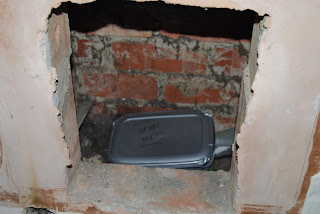