Wednesday was a bad day. I was tired and headachey from Z's recent nighttime shenanigans (he's had a cold complete with phlegmy cough) and my mind really wasn't on the job. Zachary was due a blood test at Derby City General Hospital - I left the door on the latch on the way out, fortunately L was still in. The blood test itself went really well - Z was more upset at having to relinquish the Duplo he was playing with than by the nurse squeezing blood from his foot! We then went over to L's brother's house to drop off my car which is going to be sold. Goodbye to my vehicular independence. Dropped the car off, L picked me and Z up, asked me several times if there was anything left in the car to which I said no. Half way back home I remembers I'd left a buggy in the boot of the car. Bah! Got home and discovered I'd left the patio doors wide open after putting the bin out in the morning.

Got a bit stressed at dinnertime trying to make dinner and rice pudding. Why rice pudding? I'm not sure. I think I heard someone mention it the previous week and I have been obssessing about it since then! But got everything made, although I'm not sure the pudding is quite right... 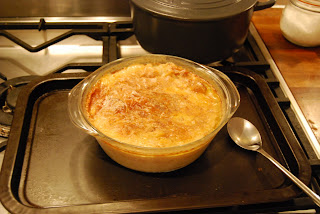 It looks okay and the flavour was great, but I'm not too sure that it should really be a thick layer of glued together rice with the milky liquid no thicker than when it went into the oven underneath. I think my basin wasn't the right size.

So with all this annoyance going on I went out for a haircut after Z was in bed. Now I'm not sure if it was the haircut (which looked great), the caffeine in the coffee at the shop, or just being on my own and having an hour's break from the house, but it really refreshed me and I returned home a changed woman. Well, almost!

Thursday much better - actually managed to get more baking done with Zachary and went out to a new playgroup in the morning. Fantastic.
Posted by Kathryn at 9:48 am

Hmmph, looks way better than my attempt at rice pudding a few weeks back, which ended up with no liquid, burnt on black rice at the pudding and a flyaway black crust 4" above the rest of the rice. The bit in the middle was quite tasty, but it was never going to convert P to the cult of rice pudding. Have you seen Nigel Slater's approach of making it in a pan on the hob?