Camping on the Isle of Wight

We've just returned from a great 4 days on the Isle of Wight. We've never been before but have friends who have been with their caravan several times and have always seemed to have a great holiday. The Isle of Wight does seem to have a bit of a 'stuck in the 50's' reputation but we found more than enough to fill our 4 days and plenty that we'll try and do on our return next year!

We bought a new tent this year to try camping with the boys (the old tent got chewed through by a mouse in the shed!) and had a trial run in my Mum's garden a few weeks ago. Emboldened by the success of that night, we booked a holiday on the Isle.

We stayed at Beaper Farm campsite which was ace. Lovely big pitches, clean facilities and a playground for the boys. 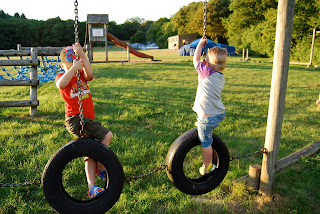 It was just outside Ryde and very close to the ferry terminal. We managed to get pitched fairly quickly after we arrived 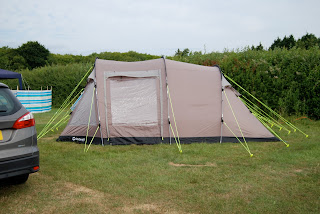 and went to Sandown for a walk along the seafront. The pier was great - we managed to get some dinner 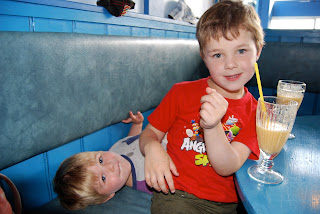 The boys slept really well in the tent - later bedtime than usual, but both of them slept till about 7 each morning which was bliss! Saturday saw us going to St Helen's beach in the morning for rock pooling. We were surprised by all the beaches we visited - all beautifully clean and not crowded at all. A lot of the beaches were very shingly but all the boys were interested in was fishing!! We didn't get very much, but there were a lot of shells and we saw lots of other people catching crabs with their bags of sausage meat - next time, next time! 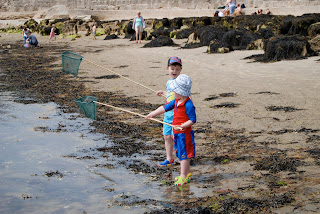 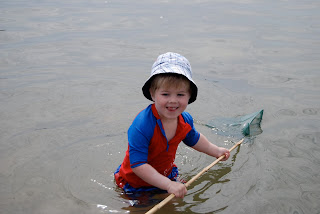 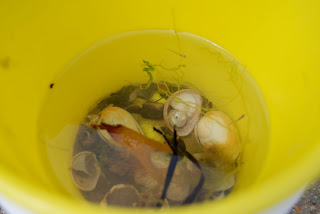 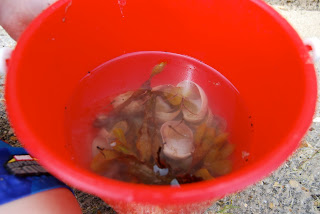 In the afternoon we sent back to Sandown to Dinosaur Isle, the big dinosaur museum there which was excellent, and the evening saw us at the Waltzing Waters, which was a rather bizarre but compelling theatrical experience - the boys loved it!

On Sunday we drove across the island to the Needles. 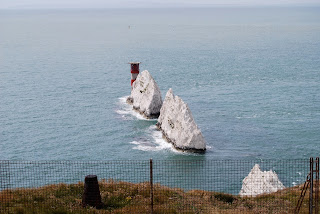 The Needles are at Alum Bay which is a kind of seaside resort in itself - rides, shops, a chairlift down to the beach - where much paddling and falling into the sea was done! 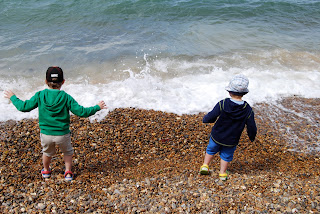 a sweet factory and glass blowing workshop...and of course the obligatory filling of containers with layers of different coloured sand!

We also walked along the cliff top to the National Trust centres right on the tip of the coast - the Old Battery which was a Victorian defensive fort, and then you can walk up the cliff a bit to the New Battery which was a secret rocket testing station. They're not as flashy as some of the big houses, but just as interesting - even more so in some ways. There was a great display with photos of people who had worked on the rockets then with a more up to date photo alongside it and some information about the job they did. 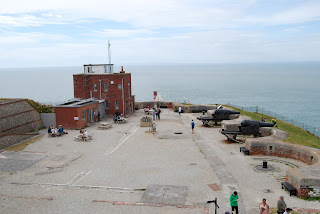 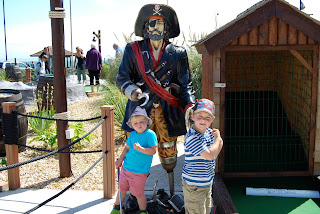 We were hoping to go up to Shankling Chine which sounded lovely (gorge and waterfall) but we didn't quite make it and ended up for dinner back at the Baywatch on the Beach Cafe in St Helens which was fab. Another trip to the Waltzing Waters (our free return visit!) and then a wet strike on Tuesday morning. Could have done without that, but after a beautiful day here today the tent is finally dry and all packed up again.

Brilliant holiday - we didn't have time for the other National Trust or English Heritage properties, Black Gang Chine park, Robin Hill park, more beach time, either of the zoos, the butterfly and fountain parks...so we need to return!

Wot, no Owl and Monkey Sanctuary? :)

When I went it was to Roebuck camp site which was about 3 miles from where you were. It had a brilliant kitchen hut with an electric kettle which was really helpful for kickstarting cooking, and a free fridge freezer you could use for fridge blocks or storing stuff, so long as you knew everything would be thrown away every Friday.

There were also tipis but they were operated by another firm.