Veg box number 4 was bumper this week - and included a free fruit box. So fruit-wise we had about a gazillion (techincal term) pears, plus apples, grapes, a melon and plums. Then in the veg box we had padron peppers again, chard, tomatoes, mushrooms, runner beans, courgettes, cucumbers and beetroot (and possibly some other bits I can't remember!).

Leigh made pear and vanilla butter with the pears and we've eaten all the rest of the fruit. The cucumbers made a lovely oriental salad with some peppers, thank you Leigh, and we managed to eat quite a lot of the other veg in meals. I also made a bumper lasagne this weekend to eat at Center Parcs next week and that included all the tomatoes, mushrooms and courgettes, plus a layer of chard between mince layers.

And the beetroot...chocolate and beetroot cake of course! 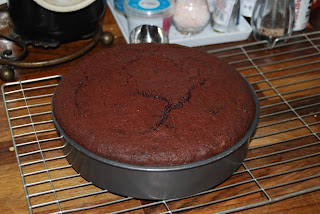 This was a Nigel Slater recipe - the cake looks great (haven't tried it yet - also provisions for Center Parcs!) but it did use nearly every bowl and implement in the kitchen! The beetroot needs cooking, cooling, peeling and then food mixing into a rough puree. You then melt the chocolate, add espresso and melt the butter in the cooling liquid. Sift the dry ingredients together. Separate the eggs and whisk the yolks into a frenzy. Fold those into the chocolate mixture and then also the beetroot. Finally whisk the egg whites to stiff peaks, fold in caster sugar. Fold all of this into the chocolate mess (ahem), mixture, and the finally fold in the dry ingredients. It'd better be worth it!!!!

And just for good measure I've also made the next biscuit on my Miranda list - Bedtime Biscuits. These have oats and malted milk powder in the mix. We have a tub of Horlicks powder in the cupboard which I used for these, unfortunately the powder had formed itself into a solid lump. Luckily the mortar and pestle did its job well!!! 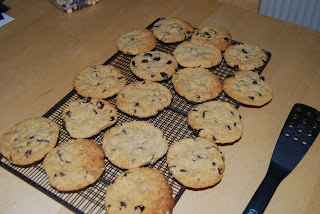 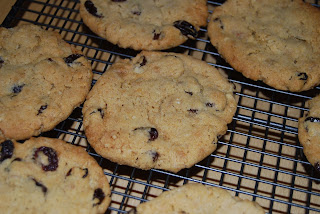