We were predicted snow at the beginning of the week - and we just had a sprinkling really, nothing very much. Stories of blizzards and heavy snow in other parts of the country flooded in...and ours arrived yesterday! It snowed pretty much all day and into the night and was a veritable winter wonderland when we got up this morning. The boys are VERY excited - Zachary has been asking every day since Monday whether his school is closed because of the snow!

So, thermos in hand we went sledging today and it was fab. I don't think I've ever been real sledging before - I grew up in Great Yarmouth on the coast in a very flat part of the country and even at uni although I remember snowball fights and snowman building, I'm not sure I ever went sledging (of course, my memory isn't entirely reliable!) We went to Highfields Park - 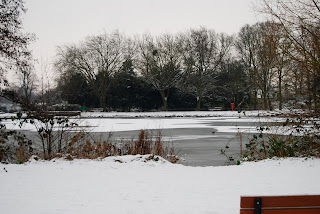 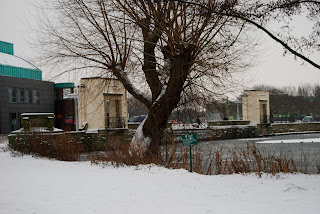 which is the front part of the University of Nottingham and there were quite a lot of people there, but there was still lots of room...despite which we still managed to knock over one girl and crash into a tree. We saw one boy almost knock himself out on the back of a bench when his sledge slid underneath it!

The boys loved it - even Leo was practically racing back up the hill to go again! He did however have some kind of (as yet) unidentified problem with his feet as we were leaving (we think he might have just been feeling a bit tender as he's starting a cold) so only Zachary and Leigh had a snowball fight in the back garden when we got home. Snowmen and more snowballs tomorrow! 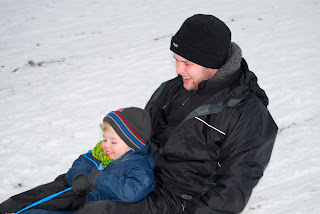 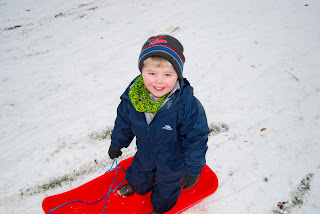 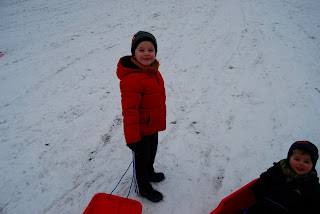