We are big fans of board games at home and are now just reaching the stage where both boys are able to play games with us at home. Certainly Leo's concentration will hold for the shorter games we have and it seems that he does better with a series of shorter games (like yesterday) rather than one longer game (like Mice and Mystics which we've tried a couple of times. Zachary can manage it in full, but Leo tends to switch off about half-way through!). But that makes sense really. And turning it into a competition made it an even more attractive proposition - the boys love competitions!

All our names went into a hat and were drawn out randomly although some how Leigh's name always came out first and Zachary's second! So we played :

Monster Factory - game I think of as a bit like Carcassonne! Basically you have to make monsters by matching up tiles - you either have to match a big purple section or a small green section. This game makes the boys laugh a lot - they love looking at all the different monster parts!

Mario Kart Wii - one lap of the Mario Circuit. I won that. Nice

The Enchanted Tower - a great game where Robin is racing around a forest trying to find the key to the Princess' tower before the wicked sorcerer who imprisoned her there. Once the key is found you then have to find the right lock as well - will the trials and tribulations of a hero never end??

Tier auf Tier - Animal on Animal, this is a balancing game and Leo is just about dextrous enough to enjoy this now and be able to balance some pieces

Monza - a card car racing game, brilliant now that both the boys are hot on their colours

Gulo Gulo - another dexterity game for children, trying to steal eggs from a nest using some rather excitingly coloured wolverines!

Points were awarded to everyone (4 for first place, 3 for second etc) and there was a bit of fudging when we had to play in teams for some of the games, but the final result was .... 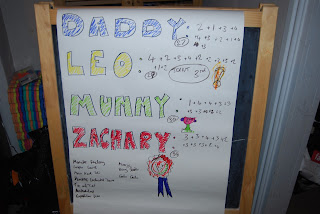 Yes, our 4 year old won and was extremely pleased with himself - hurrah!!

And to round off the day, Leigh and I played his new game Legends of Andor - we didn't complete the Introductory quest - if only we'd had one more hour!!!! (or had read the instructions properly about movement....)

All in all a great day which entirely made up for the fact that I dropped my phone into the toilet the day before. Good job I'd already ordered an upgrade!
Posted by Kathryn at 7:16 pm