Queen of ever so slightly dodgy craft

I love crafty things and making bits and pieces - where I can! Last year, Zachary received a brilliant homemade hooded towel from one of our friends. She took her inspiration from this blog, and made a fantastic bear towel - here I am modelling it 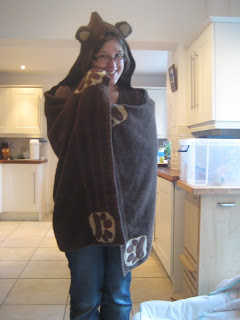 So, with one of Zachary's friends having a birthday coming up, I thought I'd make him a hooded towel like Fireman Sam as the little boy is completely Fireman Sam mad. For those of you who don't know the erstwhile hero of Pontypandy, here he is 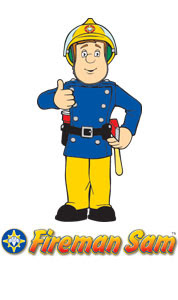 Initially I looked for a navy big towel for the wrap around part of the towel, with a yellow towel to go on top like a helmet. Don't get me started on where to get a yellow towel from - certainly none of the usual places! I found one on Ebay, but with an estimated delivery time of 8-10 working days, I had a look in Long Eaton too and found one in a very quaint shop which sells all sorts of random linens and clothing. On looking closer at Fireman Sam and thinking I wanted to try and make the towel look as much like him as I could (I think this is my failing with a lot of crafty things - too much detail!), I decided to try making a tabard style towel rather than wrap around because it would be easier to show the buttons... Yes, I know, don't laugh.

Anyway, sewing machine in hand I started tonight. Cut out head hole, stitched round it with bias tape to prevent fraying - with no swearing thanks to this little video

, cut yellow towel, stitched top of hood and pinned to bottom towel. Discovered I have made the head hole far to wide and the towel is just going to slip right over this little boy's shoulders. Blast. Never mind, Leigh had a good idea and it should be savable - watch this space!
Posted by Kathryn at 8:44 pm