It's not deep, it's too lemony, and it has a strange, dry, crusty top

What is it? My treacle tart, sadly. 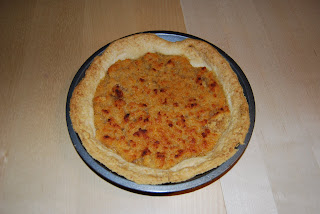 Yep, it looks like no treacle tart I've ever seen either. Unfortunately it was a recipe from my Great British Baking book, and their photo looks so appetising, so I'm wondering if it was me. I've not made one before, so had no real idea what the filling consistency should be like before it goes into the oven - the recipe didn't give any indication of what it should be like, but just said "if it's too runny, add more breadcrumbs..." How will I know if it's too runny??? My filling seemed very moist and lovely going into the oven, but came out very dry and crusty. Underneath the crust it was a bit more as I had expected, but the whole thing looked nothing like the sumptuous looking tart in the book.

I think the problem was that there was just not enough filling. I'll put the GBB recipe at the end, but it suggests using a 26cm deep ovenproof pie plate. Now I do not have one of these, but was thinking that 26cm sounded quite big (my usual cake tins are 8", which is 20cm, so I a vague idea of 26cm being a bit bigger), so decided to use my heart pie plate. However, on mixing up the filling - 6 heaped tablespoons of syrup plus 75g breadcrumbs - it became apparent that there was nowhere near enough. So, transferred pastry across to another, smaller pie plate, which it turns out is 23cm. Filling still doesn't seem to be enough. Had a look in Delia's Complete Cookery Course - she uses 6 tbspn syrup, 100g breadcrumbs, but only a 20cm pie plate. Aha. The treacle tart recipe I looked at on Nibblous has a filling comprising 225g golden syrup, 50g dark treacle, 220ml double cream, 75g breadcrumbs, lemon juice AND 2 eggs. For a 20-22cm tart. So surely the pie plate measurement in GBB is wrong? Did it mean 20cm and someone's handwriting got misread as 26cm???? Perhaps we shall never know...

The question now is...am I brave enough to try again tomorrow as this pudding was to be for a dinner party. Alex? any suggestions???

Put the flour, salt and sugar into the bowl of a food processor and pulse for a couple of seconds until just combined. Add the pieces of butter and process until the mixture looks like fine crumbs. With the machine running, add 2 tbspn ice-cold water through the feed tube - the mixture should come together to make a ball of firm dough. If the mixture seems dry and crumbly and won't bind, add more water 1 tsp at a time.

Wrap the dough in clingfilm and chill for 20 minutes. Roll out the dough on a lightly floured work surface (I used Rachel Allen's roll out between 2 pieces of clingfilm method - genius!) to a circle 3cm larger than your pie plate. Wrap the pastry around the rolling pin, drape it over the plate, then gently unroll it so it covers the plate. Press the pastry on to the base, pressing out any pockets of air. Trim off the excess with a sharp knife and chill while you make the filling.

Heat the oven to 190C/375F/gas 5 (I went for 175C for my fan oven). Gently warm the syrup in a small pan until it becomes runny, then remove from the heat and stir in the breadcrumbs, lemon zest and juice. Leave to stand for 10 minutes; if the mixture seems very sloppy, add another spoonful of crumbs, but if it seems stiff and dry, add another spoonful of syrup. Spoon the filling into the pastry case without pressing down or compacting the mixture. Bake in the oven for about 30 minutes or until the pastry is golden.
Posted by Kathryn at 8:09 pm

That is a sorry sight!

Haven't made one for AAAAGES - it was the recipe we made at school that got my parents thinking I was quite good at pastry.

But I make it with 8" flan dish. I now roll pastry on greaseproof paper with a floured pin, and you can lift it on the paper straight into the flan dish, no chance of it sticking, but trim paper before blind baking... (I hate clingfilm). 8" flan case is 8 oz flour, 4 oz butter, 1 oz sugar, one egg, enough extra water to bind.

The filling is plain and simple golden syrup, nothing else, except enough lightly crushed cornflakes to give it a bit of bite. Enough golden syrup to fill the case up halfway, I guess. I don't have anything to fall back on. Just pour the syrup directly into the case, add the cornflakes on top, and they will sink during cooking as the syrup expands.

Mixing syrup with other ingredients in a bowl sounds like a nightmare to wash up, but it's what Keith Floyd does http://www.bbc.co.uk/food/recipes/treacletart_8191 - (I love that it's a 10" flan dish and "serves 4" !)

I'm very nearly going out to buy syrup to make one now and see how it comes out...