Getting my vamp on

This is my next Rachel Allen cake - her Red Velvet cake. Initially I had planned to bake it with the boys as I thought it wold be fun for them to bake a red cake (2 tablespoons of red food colouring - yes, 2!), but on re-reading the recipe (at the end of the blog) I realised it was far too bitty and fiddly to manage with them. Cakes with the boys generally have to be weigh out, mix everything together in one bowl and then bake.

The mixing went quite well, although I didn't have the right size tins and I think the cakes were slightly undercooked - certainly the bottom layer ended up pretty stodgy, although that may have been my terrible folding in of the egg whites! One thing I would comment on is that the recipe seems to indicate you should just mix each part in until just combined, but I found that the resulting cake had a kind of swirly pattern in it - like a marbling of the red colour, and the cocoa colour. I think it may have needed more mixing than I gave it. And my frosting was well wrong. It didn't set to a crunchy outside and I think it's partly because I didn't whisk for long enough over the heat (and the sugar didn't dissolve properly), and partly because I used golden caster sugar which doesn't seem to dissolve as quickly and well as white caster sugar.

I think of this frosting as a bit of a challenge now - I'm going to have to make it again to see if I can do it right this time!!

Here's a piccie of the finished cake 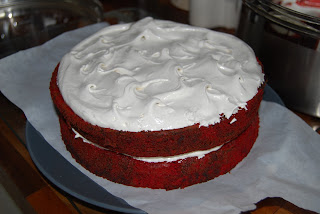 It is a wonderful red colour - very dramatic. But taste-wise it wasn't as amazing as I was expecting - I'm sure due in part to my sightly dodgy baking! It was okay, but I've made nicer cakes and to be honest I think that it would only be something I'd make if I needed something visually dramatic. But well worth having a go at, and I'm tempted to make it again just to see if it's better if I get it right this time!

2. Cream the butter in a large bowl or in an electric food mixer until soft. Add the sugar and beat until the mixture is pale and fluffy. Add the vanilla extract and the egg yolks, one by one, beating well after each addition.

3. Place the flour, cornflour, baking powder and cocoa powder in a sieve resting on a plate. Measure the buttermilk with the food colouring and mix together. It should be very red, so add more if needed.

5. Whisk the egg whites and salt in a large, spotlessly clean bowl until stiffish peaks form. Add one-quarter to the batter and mix. Add the remaining egg whites in three stages, folding them in gently with a large metal spoon until just incorporated, leaving as much air in the egg whites as possible.

6. In a small bowl, mix the vinegar and bicarbonate of soda until it bubbles up, then gently fold this into the batter. Quickly pour the batter into the 2 prepared tins and smooth the tops. Bake for 25-30 minutes (I took mine out after 30 mins, although I think they still weren't quite done then) or until a skewer inserted into the middle comes out clean and the cakes feel slightly springy on top.

7. Leave in the tins for 15 minutes then carefully remove the cakes, running a table knife or palette knife slowly around them to loosen them, and invert over a wire rack to cool.

8. To make the white frosting, place the egg whites, sugar, golden syrup, salt, cream of tartar and water in a stainless steel or heatproof bowl set over a saucepan of simmering water (the base of the bowl should not touch the water). Bring the water to a steady simmer. With a hand-held electric whisk or balloon whisk, whisk the mixture until you have shiny, satiny soft peaks. Remove the bowl from the simmering water and continue to whisk for a further 2 minutes - it will get a bit stiffer. Whisk in the vanilla extract.

9. Immediately ice the middle, top and sides of the cake with a palette knife, fluffing up the frosting to form little peaks all over the cake. You need to work fast to ice the cake, as the icing sets very quickly (but not if you do it wrong like me!). Leave for at least 30 minutes to allow a thin crust to form outside a creamy interior.
Posted by Kathryn at 7:41 pm