Today has been one of those days where you feel life is slipping every so slowly from your control, but you have absolutely no idea why!

Zachary woke up with 2 bloodshot eyes this morning. Great. Phoned nursery to let them know he wouldn't be in and phoned the doctors for an emergency appointment. I already had two appointments at the surgery for this morning - Leo was booked in for his 12 month booster jabs and then separately I needed a checkup for my (ahem) 'regular medication.' After much wheedling to the receptionist I had managed to get us back to back appointments (even though 'the nurse doesn't do pill checks during vaccination clinic'). Sadly however no such luck with Zachary's appointment. There was no flexibility for me even though I already had 2 appointments booked in and his was scheduled for 10.20. The other appointments were at 11.20. But not too bad - we turned up, had conjunctivitis confirmed, medication prescribed, and got some more bath stuff for Zachary's eczema while we were there. Then went to Asda for a cuppa and pharmacy. Back to the surgery an hour later. Zachary appeared very confused.

My appointment was fine, then at Leo's the nurse said that although they used to just do one set of booster jabs at 12 months and then we would come back for the MMR in a month's time, now it is preferred that they do them all at the same time. So, given that Zachary had a bad reaction to the MMR (fever and listlessness for 4 days) I had mentally prepared myself for Leo to have this in the new year! But hey ho, should all be out of the way by Christmas. Although hopefully Leo won't react the same way. He was brilliant - only cried at the last of the 3 injections, but after a minute it appeared that he was crying more because he wanted to be put down where he could play with the desk keys again than from the jab! He's gone to bed with Calpol so fingers crossed.

I went to the pharmacy to get my medicine only to be told there's some kind of national shortage of the particular brand I take. Boots apparently have heard some 'whispers' (what??!) that they'll be getting some in in the next week but can't confirm. Also they wouldn't recommend I try another pharmacy because there's likely to be a shortage there as well. So as I only have a week's worth left, I need to phone the pharmacy on Friday to find out if they have any and if not go back to the doctor/nurse to get a prescription for something else. Apparently the GP practice is aware of this shortage but is still prescribing. Hmm, helpful.

So a busy morning and then I decided to make some biscuits after lunch. Leigh had made some with Zachary at the weekend from Economy Gastronomy. The mix makes a roll of dough which you can then freeze in clingfilm and use on another day. Now, I have not used biscuit dough from frozen before and the only instructions in the book were that I would be able to freeze the roll, then when I wanted to make more, simply slice biscuits off the roll and cook for 8 minutes at 180C. Sounds easy - grrrr, should have just made a new batch!!!!

I think I must just attract ridiculousness, or else have no common sense at all and make a meal out of things which everyone else finds a doddle. My first difficulty was getting the frozen clingfilm off. It kept breaking into small pieces and one section was entirely underneath the top layer of dough. So I sawed that off, carefully examined the roll under the light and decided that I wasn't going to poison anyone with melted clingfilm in my biscuits! Slicing off biscuits from the roll was a nightmare - I had huge difficulty cutting through the frozen roll, and even when I did manage to get a knife through, no whole biscuits came out - the dough would just crumble and break off in the middle. I also managed to give myself two cuts on my fingers when the knife slipped. And I'm doing all this with Zachary and Leo in the kitchen trying my best to a) not swear and b) prevent Zachary eating all the smarties before I've managed to get anything remotely resembling a biscuit onto the baking tray!!

I'm sure it's me making life harder for myself but I wasn't sure I could defrost the roll and then refreeze. Especially since the book appeared to suggest that the roll could be sliced from frozen. We're choosing to blame an over-efficient freezer!

So here's what the biscuits looked like when they went in 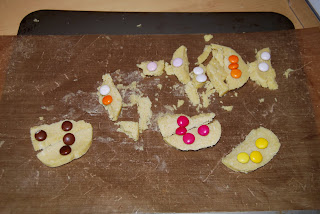 And when they came out 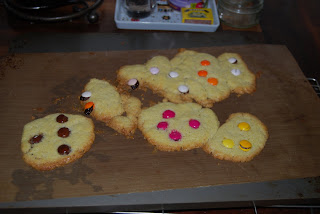 I love the 'super biscuit' made from the melty bits of crappy biscuit all joined together! The biscuits tasted great by the way.

Oh and see if you can guess which film Zachary watched at the weekend from the way he describes it. This'll give you a small insight into the daily guessing games we have trying to work out which TV programme he wants to watch and is desperateley trying to convey to us without using its name...