Had a great weekend, all the better for being at home. Saturday we visited Hobbycraft - always a mistake even with list in hand! Came away with much more than we went for, but all will be useful in time. Several things were returned to the shelves!! Unfortunately my handbag got left in the car park and when I rang the store after we got home to see whether it was still there, I thought for a moment the manager was going to refuse to go and look as she told me 'we are very busy here!' It wasn't there, and hadn't been handed in at the store next door either. So I rang my phone, not really expecting any luck, and it was answered by a kindly gent who had found the bag and taken it with him. Leigh went out to collect it and it is now safely home all complete. Phew!

I should say here that there has still been no progress on the potty front. Was intending to try big boy pants this afternoon, but didn't quite get there. Am going to stay in and try tomorrow morning...

In the afternoon it was the 1st birthday party of the little girl of one of my friends - lots of cake, pass the parcel and presents! Today I went to church with the boys, then we had a spontaneous lunch in Tesco, spent far too much in the toy department, dressed the boys up in their Christmas kits for a photo session when we got home, and then I made a lovely hazelnut cake. The recipe is at the end of this blog. 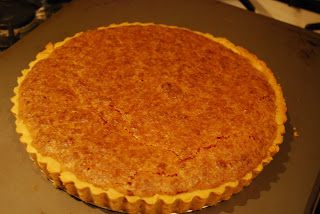 which Leigh made last week, and let me tell you it was absolutely delicious! He put a layer of jam on the pastry under the coconut topping and it was totally brilliant. So next cake is the Italian Hazelnut cake - lighter than you think it'll be. I had been putting this off to a weekend as on re-reading the recipe I realised it was quite fiddly, rather than one of my usual 'tip everything into the Kitchen Aid and beat' cakes! I also found we had enough kitchen gadgets to make the cake without having to wash anything up in between - not sure whether that's good or bad! I ground the hazelnuts in our stand blender, then used a hand-held electric beater to whisk the egg yolk mixture, and the Kitchen Aid to whisk the egg whites. It cooked in the allotted time and is very tasty. Just waiting to see how it is on the second day... 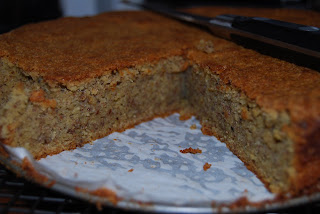 2. Grind the hazelnuts with the baking powder and ground cinnamon in a food processor until fine. Combine with the butter.

4. Whisk the egg whites and salt together in a large, spotlessly clean bowl until stiff peaks form, then gently fold into the nut mixture in three stages so as not to deflate the whites.

5. Pour the mixture into the prepared tin, smooth the surface and bake in the oven for 55-70 minutes (it took 55 mins at 150C in our fan oven) or until the cake feels firm and a skewer inserted in the middle comes out clean. The mixture is quite delicate so don't be tempted to open the oven until close to the end of the cooking time.

6. Allow to cool in the tin for 15 minutes, then very gently ease the sides of the cake out of the tin using a palette knife. Remove the base after another 15 minutes and leave to cool before cutting into slices.

We served with vanilla ice cream - also homemade!!
Posted by Kathryn at 8:37 pm