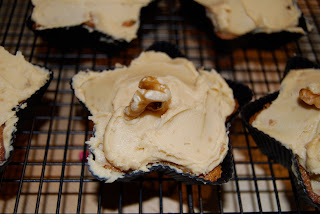 Zachary helped me make these - when we got to the icing stage, he was very excited about the prospect of putting sprinkles on (which is what we do with the basic fairy cakes I often make with him). I tried to explain that these cakes have a nut on the top and not pink/multi-coloured sprinkles, but he would not be persuaded! We got the sprinkles into a bowl (so that he didn't manage to use up the entirety of the packets I had!) to be used on a few of the cakes, then Zachary declared he needed a spoon, went and got one from his cupboard and immediately ate a full spoonful of sprinkles!! Cheeky monkey. I took the spoon off him, explained he shouldn't just eat them and he appeared to acknowledge this. He asked for the spoon back, which I foolishly gave to him, and when I turned back, caught him with it mid-way to his mouth, again full of sprinkles!!!! Managed to get a few on the cakes...

1. Heat oven to 180C/160C fan/gas 4 and line a 12-hole muffin tin with paper cases. Put the coffee granules and water into a mixing bowl and stir until smooth. Add the butter, flour, sugar, milk and eggs. Mix with an electric whisk until smooth. Stir in the walnuts, then spoon into the cases.

2. Bake in the centre of the oven for 20-25 minutes (about 18 mins if going into a pre-heated fan oven) or until risen and golden brown. Transfer onto a wire rack until cold.

4. Spoon onto the cupcakes, then decorate each one with a walnut half.
Posted by Kathryn at 9:40 pm