Leigh bought the Economy Gastronomy book recently and we've been trying out some of the recipes. Now, I confess that I haven't read the introduction to the book and just am just relying on what Leigh has told me and what I've picked up from the recipes as to the ethos behind it. The way I understand it is that the book shows how you can make a joint of meat, or other base meal (like the chickpea one we tried today) last for 2 or three dinner meals and save you some cash because you can make it go further. We try to be pretty good about making food go further than one meal, but it does tend to be fairly basic fare - so making our spag bol last 2 meals rather than just one.

However the recipes in this book are not particularly simple and use quite a few ingredients I wouldn't normally have in my store cupboard, so although the base mix/meat goes further, I still had to spend on the additional ingredients. We tried the poached chicken base last week - so from a whole poached chicken we made chicken and sweetcorn pies (6 small pies, each one enough for a main meal - yummy), coronation chicken (tasty but had no dried fruit in it, so not quite sweet enough for my taste, but easily resolved when made again), and got about 3 litres of chicken stock. Half of this went into the pies and I used the other half in a sweet potato risotto, which was very tasty. The book's suggested third meal is a hot and spicy soup with the stock, but we went a different way.

Today's foray was into the world of chickpeas. The third recipe is coming tomorrow, but so far they've been what Leigh calls 'weekend' recipes - that is, they are a bit fiddly and time consuming - ideal if you have a weekend afternoon free to spend in the kitchen. So not ideal for me to be making with the 2 boys running around, but I was able to make good use of Leo's nap times today and got the base and houmous made in the morning and the pie made well ahead of dinner time. I was concerned about getting the pie done because that itself (not counting making the base) was estimated by the book to take 35 minutes to make and 50 minutes to cook. Fortunately Zachary has been glued to the new series of Show Me Show Me this week so I was able to pop him in front of that while I cooked (bad mother that I am! Although I did ask if he wanted to help me, but the answer was no ... probably because there was no egg cracking involved!).

So here we have the chickpea base 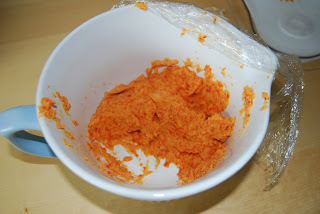 Which made red pepper houmous - delicious 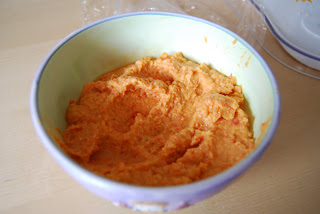 And Othello's Chickpea Filo Pie - ready for the oven 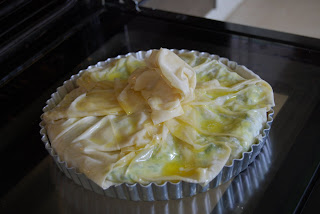 And out for the table 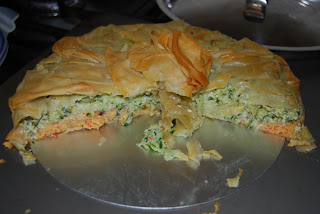 Hmmm. The writers of the book rave about this pie but we weren't too sure. It's okay but not fantastic - not sure if the problem is me not seasoning it enough (something I'm guilty of a lot) or whether it's going to be one just not to our taste. Essentially it's a filo pie, bottom layer being the chickpea base mixed with toasted coriander seeds and ricotta cheese, then pastry, then a layer of grated courgette with ricotta, pepper and lemon zest. Although the pie doesn't look too bad, I had a bit of a mare with the filo. It was the first time I've used it, and to say that I and my cooking aren't known for their delicacy and elegance would be an understatement! A lot of my cooking looks on the rustic side of agricultural, so trying to get to grips with really fine, cobweb-like pastry was fiddly!!! But I got there - maybe needed some more melted butter though as it tasted a bit floury when it came out.

Tomorrow, all hail the Anytime Spicy Chickpea Loaf. And then we need to decide on our next meat - ham??
Posted by Kathryn at 7:28 pm