Just got back from a lovely week's holiday in Yorkshire. We stayed in a little cottage in a village called Ellingstring, which is about 4/5 miles outside Masham (home to the Theakston brewery), and we found it was perfectly placed to go out and about with the boys. The cottage was great - all mod cons but still cottagey and very cosy. Zachary had a great time bouncing on all the beds to test them out and Leo was in his element - lots of drawers on his level to open and explore. Thanks to Nanny, we've also recently become members of the National Trust and made good use of our membership!

On Sunday, we took a trip out to Harrogate where we discovered Bettys (where I could easily bankrupt us!), and the beautiful Valley Gardens. The gardens were lovely and there was a great play park there, not to mention wonderful Ripley ice cream in the tea shop. We also took a trip to Ripley itself (about 3 miles out of Harrogate), took a turn round the town and bought lots of sweets and expensive sausages.

On Monday we went to Fountains Abbey in the morning and discovered that we could walk round and through the ruins, which was ace. Zachary was fully wellied up and spent the entire time searching for muddy puddles. He found lots! In the afternoon I'd booked us into The Forbidden Corner, which is quite indescribable but really great. It was a bit difficult getting round with the pushchair, and even when we dumped that, carrying Leo was not easy. So we'll be going back in a few years' time when they can both walk round. It's a big kind of garden with lots of hidden doors and tunnels, and underground rooms and chambers, and all sorts of hidden goodies. Well worth a visit.

On Tuesday we went to York - just over an hour from where we were staying. Used the Park and Ride which worked really well. We visited the Jorvik centre, the Minster (but didn't go in - £8 each!!!), walked along the Shambles and found the Travelling Man (board game shop). Also bought some very expensive (but very delicious) fudge from The Fudge Kitchen.

Wednesday saw us attempting a visit to Masham in the morning which was quickly abandoned due to a poor market and very blowy weather! Went instead to the Wensleydale Creamery at Hawes where we could basically eat our own weight in cheese in the sampling room. Back to Fountains Abbey in the afternoon and we explored the water garden and deer park as well. Plenty of exercise for us both pushing the double pushchair!

On Thursday we went to Brimham Rocks in the morning, which was fab. The weather started out iffy but was glorious by lunchtime and the views from the rocks were amazing. There was also a very handy pushchair path which was appreciated! We stopped at a new ice cream parlour called G&T's on the way back to the cottage and then went to Harrogate again in the afternoon for more play park.

A very busy week, tiring but great. And we managed to watch the entire 4th series of the US Office in the evenings - hilarious! All the holiday pics are on Flickr, but here are some good ones 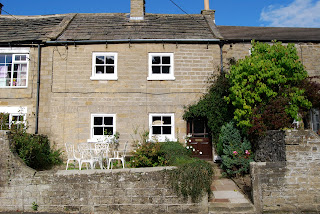 On the swings in Valley Gardens 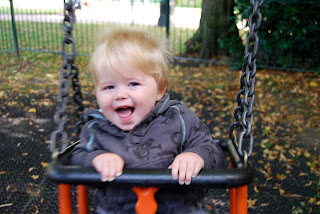 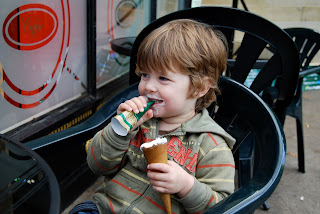 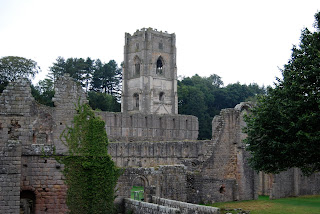 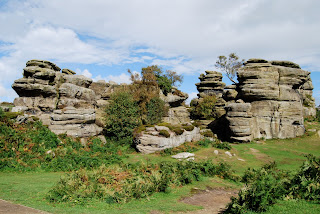 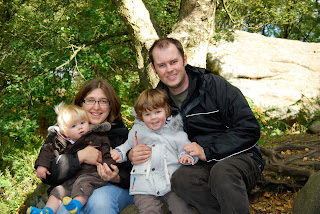