Start of the new year

Well, new school year anyway - I thought it sounded a bit more positive than 'end of the summer!' This week has certainly been the end of the summer though - the mornings suddenly seem that bit darker and cooler (although the afternoons are still baking!), and although I've managed to stave it off for another week, my evening appointments will be starting again - orchestra on Monday, Rotary on some Tuesdays. I've had a lovely summer doing bugger all in the evenings (apart from games on a Wednesday which has continued throughout) and had time to do more baking and sorting out. It's going to be difficult getting back into the old routine again, but I'm sure it won't take long!

This week has been a bit rough and ready too - our new childminder is away on holiday and the holiday clubs stopped last week so my Mum and her husband Chris came up to help out with the boys Monday, Tuesday and Wednesday ready for them both to start back at school (well, school for Zachary and new nursery for Leo) this morning. She had a big plan - Nottingham Castle Monday, Sheffield Tuesday and Crich Tramway Museum Wednesday. Needless to say they ended up in Nottingham all 3 days and still didn't manage to reach the Castle!! I think they all had a good time - Mum doesn't see the boys all that often and although they pretty much ran her ragged, she does love being with them.

We also had a new veg box this week - lots of delights, but nothing that I'm going to turn into a cake at the moment - although typing this did remind me of this recipe. We got a lot of tomatoes this week and my Mum brought some from her garden too - mmmm tomato cake!! They're not plum tomatoes....never mind, might still be able to make something of them! 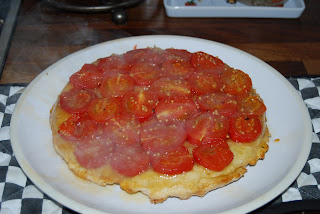 Some other bits of my week in pictures -

Flowers from my Mum 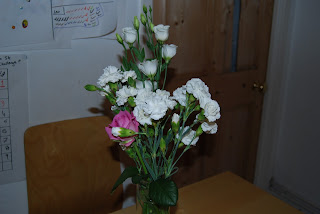 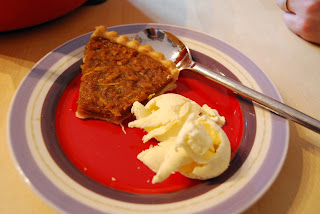 Very tasty - but I think I'd still prefer a version with just golden syrup in it! This one had a tablespoon of black treacle, grated apple and half-fat creme fraiche in the filling.

And finally, first day of school photos. For some reason it is incredibly hard to get my 2 boys to stand together (but not in front of each other), hands by side (no hands in front of face) and smiling (usually it's one, then the other, then both but one is by then doubled over in hysterics...you get the idea). I managed to get this photo 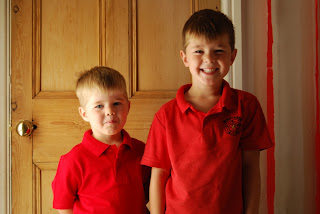 by also agreeing to a kung fu photo! 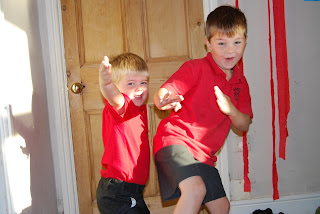 They both had a fab time today.
Posted by Kathryn at 9:27 pm