Had a free afternoon today and the prospect of the boys running rings round us at home was not appealing, so we ventured forth to Hardwick Hall, making good use of our National Trust membership! It was only about 25 minutes from us so easily somewhere I can take the boys again for an afternoon and was great. 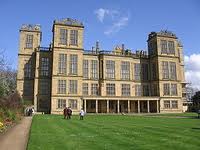 They've recently transformed the old stable block into a 2 shops, a kiosk and a restaurant (moving them from their original positions in the old kitchens of the 'New' Hall) and then there's an Upper and Lower Park to explore as well as the 2 halls. We didn't get to the parks today.

The 'Old' Hall is the house where Countess Elizabeth of Shrewsbury (or Bess of Hardwick, formerly one of Queen Elizabeth's ladies in waiting) was born, and the 'New' Hall was built y her during her lifetime and respresents her wealth and success in life. The gardens are lovely too. The Old Hall is partly demolished, but the skeleton remains and you can still climb the great staircase up to the roof. There are also parts of plaster panels left on the walls so you can imagine what the rooms could have looked like. There were reportedly 96 steps in the staircase, although on Zachary's count, he made 116!!

The New Hall is more of a traditional stately home, but being the National Trust, there were quizzes and trails for the boys to follow, a room with colouring pencils and paper, and dressing up opportunities in some of the rooms - Leo and Zachary looked particularly fetching in their ruffs and pearls! What a great afternoon.
Posted by Kathryn at 9:00 pm