I really should read recipes all the way through to the end before I decide to make them. This is something which has occurred to me several times over my cooking experiences and today, bouyed by the success of yesterday's Swiss roll, I had time and thought I'd make some parkin to eat later. It sounds lovely - "a dark and moist sticky cake," made in a similar way to gingerbread but with the addition of oatmeal.

It was all very straightforward, mix went into the oven and just as I was reading through the post-oven instructions, already with visions of Leigh and me settling down with a cup of tea and slice of parkin later, I read the final sentence. Grrrrrr. 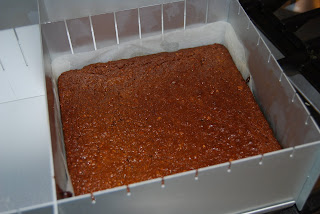 a 20cm square cake tin, greased with butter and lined with greaseproof paper (I have a super duper adjustable square cake tin which can make lots of different sizes of square and rectangular cakes - just the ticket! Had to line it carefully though to make sure nothing leaked through the slits in the supports which allow the adjustments)

2. Gently heat the butter, sugar, syrup and treacle in a medium-sized pan, stirring frequently until melted and smooth. Beat the egg with the milk until just combined. Pour the melted mixture and the egg mixture into the bowl. Add the chopped ginger or peel if using, then mix everything together with a wooden spoon to make a thick batter. Put into the prepared tin and spread evenly.

3. Bake in the preheated oven for about 45 minutes, or until firm to the touch. Remove from the oven - the top may have sunk slightly - and run a round-bladed knife around the inside of the tin to loosen the cake. Stand the tin on a wire cooling rack, leave to cool completely, then turn the cake out and wrap it in foil. KEEP FOR A WEEK TO MATURE BEFORE CUTTING!!!