Mummy says I am coming on leaps and bounds now. Something to do with the fact that I've 'found my feet.' Duh. I knew where they were all along, it's just that now I choose to hold them. Mummy seems to like it when I play with them...

..except when she's changing my nappy for some reason. I can't understand it - if I play with my feet then my bottom's in the air which makes things easier doesn't it? Of course can now get my hands down to all those areas which are usually covered by my nappy. I like to play a fun game with Mummy by seeing how many times I can get my hand down there while her back's turned and then quickly try to get my hand in my mouth before she spots what I've been doing.

At baby group today I saw my friends Holly, Samuel and Emily. Holly's only a little bit older than me and she has TWO teeth already! She's says she plays games with her teeth on her Mummy when she's being fed - I can't wait until I can do that. What fun!

Mummy said I was going to help her make a card for Nannie and Grumps by doing prints of my hands and feet. That's all very well, but if Mummy thinks I'm going to let her mess with my hands - their proper and rightful place is in my mouth. Creating dribble. Silly Mummy.

Still she managed to get a sock off and paint my foot with this cold stuff before I realised what was happening. So I thought then would be a good time to show off my skills to the other Mummies there. First I put my hand all over my painted foot. Then while Mummy was fumbling about for a wipe and trying to stop me touching it again, I put my feet together (I still had a sock on the other foot). Then I got a bit bored waiting for Mummy to get me wiped up and tried to stand on Mummy's leg at the same time as putting my hand in my mouth.

I heard Mummy mutter something about why she only had 2 hands, but I wasn't listening - I was too busy charming the pants off the other Mummies with my smile and new raspberry noise. Eventually I think we managed to get a print of my foot. Silly Mummy though, instead of giving up while the going was good, she decided to do the other foot. So I just repeated my skillz.

By this time I was totally exhausted so I moaned at Mummy for a bit until she put me on her lovely comfy shoulder and rocked me to sleep. Happy days. 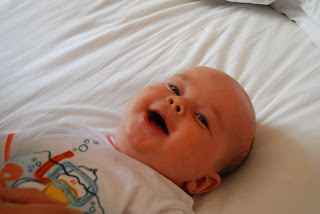