It's another Crafty Creatives kit! This one was to make a Gothic Masquerade mask and seemed straightforward. They provided all the bits I needed plus a pattern... 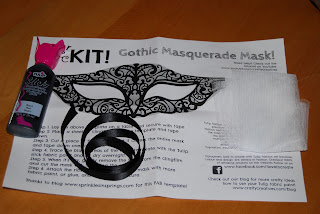 I had to tape clingfilm over the pattern and then the tuille over the cling film. You then use the paint to draw out the pattern and leave it to dry. This was actually quite tricky - as you can see, the pattern is fairly complex with lots of thin and thick lines. Unfortunately I could only manage to get one thickness of line from my paint (possibly my ineptitude!) so I had to leave out some of the detail, otherwise several of the areas would have just ended up as one large black blob!

Once the paint is dry... 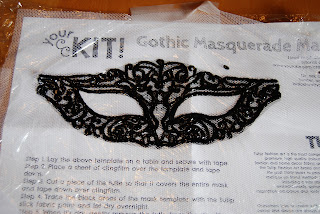 the instructions appeared to say to remove the tuille from the cling film so I spent some time trying to peel it off the back of the paint. Unsuccessfully. The paint was well adhered to the clingfilm and I wouldn't have been able to separate the two without distorting the paint lines, so I just cut around the cling film. Added ribbon to the ends and voila! Not too bad 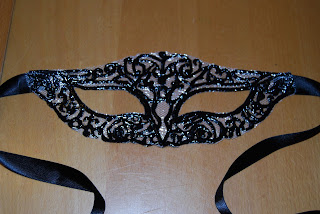 Although at the moment I have no idea when I might use it - it's adorning the mirror at the moment! Still its time may come - I am slightly concerned that I am just starting to fill the house with random stuff!

The next kit I'm attempting is a crochet mouse. Hmmmm. First time I got to round 8 of 20 - there should have been 26 stitches in the round - mine had over 30. So I started again, had too many stitches by round 2. Started again! I'm back to round 8 now and it has the proper number of stitches so I'm hoping the 2 false starts have given me the practice I needed. It's certainly very tricky trying to manage the work in your hand - my husband however is well practised in this. Have a look at the brilliant things he's been making over the last couple of weeks, much to the delight of our sons 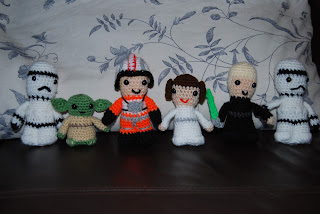 There are more planned - although having 2 children means that he's having to do 2 of everything (there's a Leia missing from the photo and the second Yoda will shortly be started). Also the boys have a slightly distorted view of how quickly they can be completed - every morning they ask if another one's been finished!!!!