The Good, the Bad and the Ugly

(the title is really about my baking efforts but I got carried away talking about Zachary's party too!)

Zachary's party went really well - the balloon modellers were a massive hit with everyone! Paid them a flat rate for basically as many balloons as they could do in a hour - 2 or 3 children must have gone home with around 5 balloon models! Here's Zachary with his hat and his spider!!! 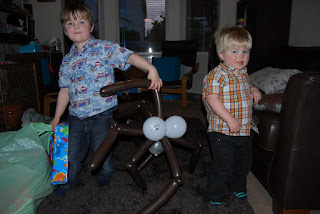 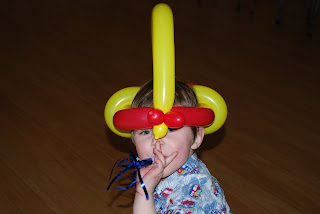 His birthday cake came out well - I had arranged to borrow a number '4' cake tin from a local cake shop, but when I collected it I realised it was much smaller than I had imagined...not really going to feed 15 children plus parents kind of small. But luckily, Leigh remembered that a cake decorating book I have has a grid at the back for making lots of different size vanilla sponge and fruit cakes (for wedding cakes and other tiered delights), so we cracked that open, got out the big square tin with adjustable sides and made a 9" square two-layer cake sandwiched with jam and buttercream. Yum. Then as befits the theme of the party, I decorated it... 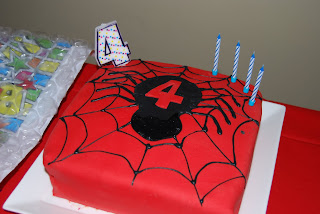 and made some little gingerbread spidermen to go with it (please no comments on the 'skill' or otherwise of my icing here!!!). 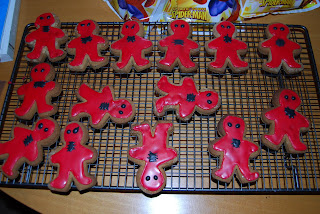 I used Edd Kimber's recipe and I don't know whether I ended up using too much golden syrup (I prefer working with weight in syrup because I know my tablespoons always end up too full!) or something else, but it ended up really greasy and even adding more flour didn't really seem to help because then it was almost impossible to roll out! I did manage to salvage 15 men from it though and they were delicious. I shall definitely be using the recipe again, if just to prove that I can make it properly!


I also made some shortbread biscuits and piped webs onto them but forgot to take a photo!

Then we get to the chelsea buns. I have made chelsea buns once before and have been wanting to try them again ... but this was not a great effort. 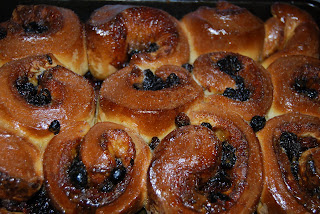 They don't look too bad and were quite nice straight out of the oven, but as they cooled they got more dense and hard and I knew that leaving them overnight would result in little rocks the next day! I used our KitchenAid to knead the dough - I always get on really well with it when I make dough for our pizza bases, but it was not to be this time. I had worked out my timings so that I could make them while Zachary was at nursery one morning (and they had to be done by the time I went to get him as we were going straight out for lunch from school), but either the room wasn't warm enough, or something went wrong with the kneading because the dough just did not rise! I had allowed an hour for the first rising, then realised after 45 minutes that something wasn't right (!) and switched the heating on, but it was all too late by then. When I make pizza dough, I usually leave it to rise for the entire afternoon - I need to try these again when I have much more time available and I can really wait until the first rising is done properly. Ho hum.
Posted by Kathryn at 7:30 pm