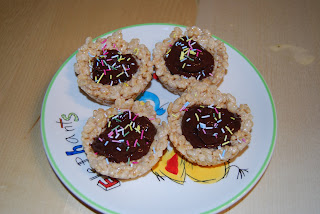 This is a mash up of 2 separate recipes we found. I noticed a recipe for Rice Crispie cake pots on the back of a cereal box a couple of weeks ago, and Leigh was sent this recipe by a friend as it makes a very tasty ice cream with no eggs (great for pregnant friends!). If you don't freeze it, it makes chocolate pudding. Fab.

I made the pots and Leigh made the pudding. The pots are very straightforward although I was surprised at just how sticky the mixture was to handle. It was almost impossible to get it off my fingers and shape the pots, but I found that spraying my hands with the cooking spray oil worked very well and helped. The pots were quite thick and I'm not sure whether they should be a bit thinner to allow for more filling, but either way they're very tasty!

- Melt the butter. Add the marshmallows and heat gently until melted.

- Stir in the rice crispies

- Coat the cups of a muffin pan with spray cooking oil then divide the mixture between them (the original recipe said it would make 16. I made 12 and then used the rest to make balls of marshmallowy rice crispies). Cool and then remove from the pan - I used a small spatula to help ease them out.

- Fill with pudding, frozen yogurt or ice cream. Top with sprinkles and/or nuts and serve.

Mix 100ml of the milk with the cornflour to make a smooth paste. Set aside. Mix together the cocoa powder, sugar and salt in a large bowl.

Heat the remaining milk to simmering point, then pour in a steady stream over the cocoa mixture whisking vigourously to prevent lumps from forming. Return the mixture to the hob, cooking over a very low heat at barely simmering point. Stir the bottom constantly to prevent scorching; it can easily catch so take care. Cook for six minutes, then add the blended cornflour, whisking again to prevent lumps. Return to a simmer and cook for 2 minutes until thickened and smooth.

Strain the mixture into a clean container and cool in an ice-water bath, stirring often to prevent a skin from forming. Refrigerate.
Posted by Kathryn at 7:54 pm