It's been a productive few days!

After a bit of a baking drought, I've managed to bake a few new (and old!) things over the last few days and I've finally finished my animal alphabet cross stitch!

First was some doughnut muffins from the Good Food magazine - very easy to make and they do seem to taste doughnutty...although that might just be because they're covered in caster sugar after baking!!! I had a little trouble dividing my mix so that the jam was properly covered (I used too much in the bottom layer), but they turned out fine. As I was typing the recipe out I also remembered that this was a recipe the boys helped me with. Leo was in charge of the dry bowl - I turned my back on him to help Zachary with the wet bowl, turned back and saw him spooning flour into his mouth! Nice. 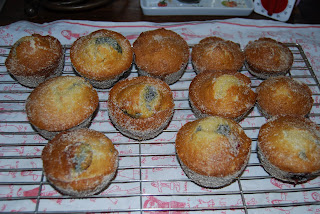 1. Heat oven to 190C/170C fan/gas 5. Lightly grease a 12-hole muffin tin (or use a silicone one). Put 140g sugar, flour and bicarb in a bowl and mix to combine. In a jug, whisk together the yoghurt, eggs and vanilla. Tip the jug contents and melted butter into the dry ingredients and quickly fold with a metal spoon to combine.

2. Divide two-thirds of the mixture between muffin holes. Carefully add 1 tsp jam into the centre of each, then cover with the remaining mixture. Bake for 16-18 minutes until risen, golden and springy to the touch.

3. Leave the muffins to cool for 5 minutes before lifting out of the tin and rolling in the extra sugar.

Then this week, Leigh made some lemon marmalade from the February 2012 Good Food and I followed this up with their lemon bakewell tarts as well. The pastry was a bit of a bind to make (interesting, reverse method of making) and cracked a lot while I was trying to roll it out, but it came out of the tins beautifully and there were no soggy bottoms. 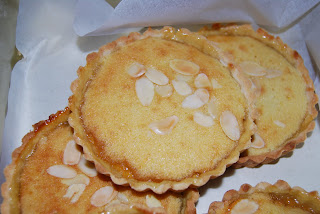 1. Heat oven to 200C/180C fan/gas 6. To make the pastry, place the butter and lemon zest in a food processor and blitz until soft. Sieve in the icing sugar and blitz again until light and creamy. Mix in the egg yolk with 1 tbsp water, then add in the flour until it's just combined.

2. On a lightly floured surface, bring the pastry together into a ball, then wrap in cling film and flatten lightly to form a disc. Chill in the fridge for 30 mins.
3. Roll out the pastry and use to line six 10 x 2 cm loose-bottomed tart tins, trimming off any excess. Put in the fridge while making the filling. If pastry cracks or breaks, patch up with trimmings.

4. To make the filling, beat together the lemon zest, butter and caster sugar until light and creamy. Add the eggs, one at a time, including a spoonful of the ground almonds with each addition. When all the egg has been added, mix in the remaining ground almonds and flour.

5. Spread the marmalade or curd over the bases of the tart cases. Spoon over the filling and smooth with a palette knife or spatula. The tarts will be full to the top, which is fine. Scatter over the flaked almonds, sit tarts on a baking tray and bake for 15-20 minutes until lightly golden.

Then yesterday I went a bit mad in the kitchen, making not only the bakewell tarts, but also some mini muffins and a cherry bakewell sponge. Yom.

And finally my completed cross stitch - ready for framing, great! 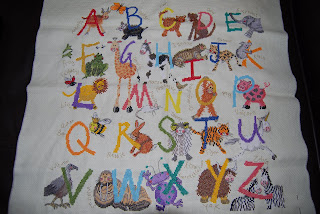