The most cobbled together rabbit costumes ever! 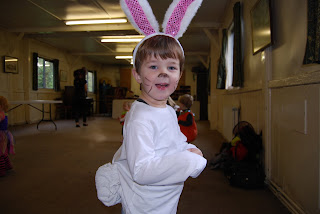 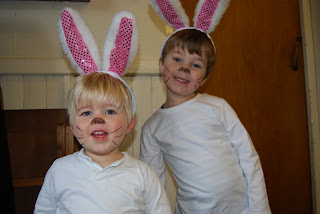 I've been taking Leo to a music group on Tuesday mornings since Zachary started nursery. They had a half-term Halloween fancy dress session this week which I was dubious about taking the boys to for 3 reasons - 1, the cost. One session for Leo is £4, so I was expecting £8 for the 2. 2, it's usually absolutely rammed with children so I was anticipating even more at half term and 3, I don't really do Halloween and was reluctant to buy costumes for the boys which they'd only wear once and didn't want them to be the only ones without.

I ummed and aaahed about it but finally decided we'd go and just use the rabbit ears the boys had at Easter. Then on the day I upped the ante and took my eye pencil to draw on noses and whiskers, put them in white t-shirts and made some bobtails with pairs of socks and flannels!!! It's a rough and ready costume, but the boys loved it!!!

(btw my worries were totally unfounded - it was only £1 extra for Zachary, there were actually fewer children there than normal and there were one or two children without costumes) 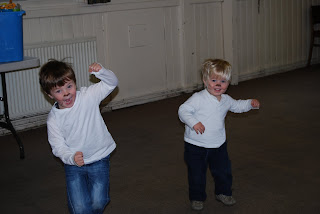