Bought on a whim

I'm not a very spontaneous person, and having 2 children has quashed most of what little spontaneity I had - the constant need to know where we are going and what we're doing so that I can be properly prepared has seen an end to that!!!! So I very rarely buy things on a whim (except clothes for the boys!), especially anything arty or for the house. Anyway, one of the first trips I made with the boys after they'd both had chicken pox was to Attenborough Nature Reserve which is close to us, and in the cafe there they were displaying the work of a local artist, who uses pyrography to etch pictures onto wood pieces.

Most of the items weren't really my taste (or superb examples of the pyrography technique...), but I saw one I really liked and just bought it! I never do that! Maybe I was heady with the first taste of freedom in ages and the thought that I hadn't really spent any money over the last few weeks went to my head! Here it is 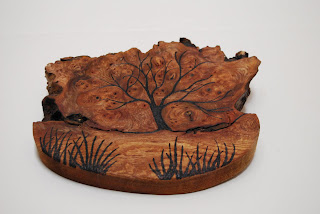 it's finally been hung up, and what I liked about it was the relative simplicity of the burned picture and more than that, the grain of the wood. It hasn't come out brilliantly in the photo (and the photo appears to have been taken at a particularly strange angle), but the swirls and patterns reminded me of this painting, which is beautiful 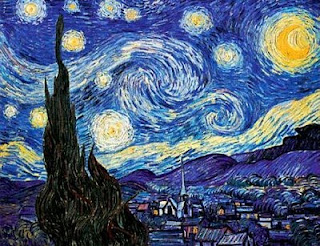 I'm still really pleased with my purchase. Which is a relief!
Posted by Kathryn at 7:25 pm