There's far too much going on!

We've had an exciting (well...that's one word for it!) week or so. Firstly, L came down with a stomach bug and basically hasn't eaten for a week. He seems to be all repaired now though, which is good - annoyingly though, he phoned the doctor last Wednesday for an appointment, and they had none free until today! What if it had been more of an emergency???

Also, we've had no central heating or hot water since last Thursday-ish. The water was playing up before then, but we didn't really notice because the only time we really use the hot tap intensively is in the evening when the heating is on anyway and there was some water heating going on. If there was no central heating on, hot water was non-existent. It appears the fan has packed up and some other bits need replacing to fix the hot water situation - parts needed to be ordered and so the work can't be done until tomorrow. So it's been a weird few days back to a world without central heating - electric heaters a go-go, and poor old Zachary has had to endure a couple of showers with me as there's no hot water for his bath. He is very slippery!

Z now also has his first tooth! It's very exciting and the tooth is poking well above his gum now and can be seen as well as felt (there was a bit of demurral last weekend when Annie suggested there was a tooth on the way because nothing could be felt!). This has however led to a couple of nights of screaming!!!

Nighttime sleeping also seemed to have gone downhill generally and Z was ending up in our bed quite a few nights because we could not put him down in his cot peacefully (lots of excuses - tummy bug, teething, another cold...) - unfortunately he no longer seems to sleep as well as he once did in our bed, and there were still frequent wakings, as well as on one occasion, Z being wide awake at 3 in the morning wanting to play with us, prod our faces etc etc. But, thanks to a visit from Auntie Becky (she of the tough love solution - and no children of her own yet!) at the weekend, we have hardened our resolve and instituted a new regime. Z went to bed on Saturday and immediately started crying. Usually, we would pick him up and rock him to sleep on a shoulder until he settles and then try to put him down in the cot - usually resulting in one of us spending a good half hour trying this until getting him down successfully.

This time, we left him for five minutes, and then went back to check. Still crying. Left it another five minutes, then ten minute intervals. He finally went to sleep an hour later and it was horrendous going up and not picking him up to comfort him...but...somehow it worked. He woke about an hour later - we dealt with it the same way and he was asleep again much quicker. Next waking was at half midnight, then not again until 7am. And then he went back to sleep for another hour after that!

It was the best night we've had for ages, not least because Zachary was in his cot all night, and I didn't spend two hours in the cold in his room with him asleep on my shoulder. Unbelievable. And he didn't seem to hate us on Sunday. Tried it again Sunday night, and again met with success.

It's really hard to do, because both of us just want to comfort him when he's crying, but seems to be working at the moment. L said he also got a sense one time he went up that Z was crying just to be picked up. We're giving it a week to see whether he gets used to the new arrangement and settles more quickly by the end of then.

I've also finally finished my first project on the new sewing machine - curtains for Z's room, and I'm really pleased with them. Haven't taken a picture yet, but will do shortly.

Mum's visiting tomorrow, Z has his first swimming lesson here (cold permitting) and hopefully the heating's being fixed, so it's looking pretty busy for this week too.

Finally, L has a time capsule thingy which reminds him of photos taken a year ago - this one came up for today...it all seems so long ago! 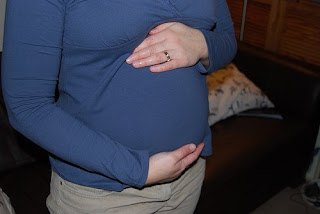